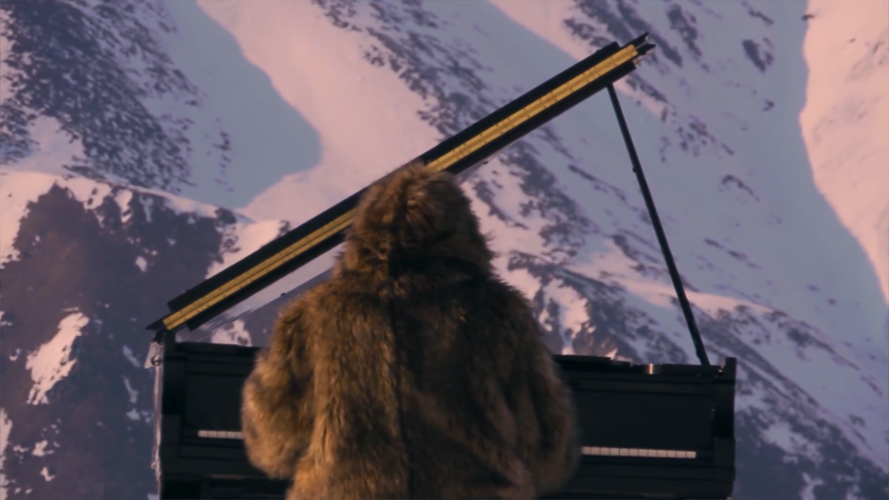 Yeti and the Steinway in the wilds of Alaska

In April 2011, at nearly 13,000 feet above sea level, Peter Halstead, Co-Founder of Tippet Rise, donned a Yeti costume. He, a film crew, a Steinway grand piano, and its technician had been helicoptered to the snow and ice-encrusted edge of Marcus Baker Peak, the highest point in Alaska’s Chugach Mountains, to create a series of fantastical films.

There, within earshot of steep slopes literally sliding with snow, Yeti discovers a piano in the glaring white; he examines and explores it, physically and metaphysically, and then plays works by Strauss, Brahms, Beethoven, and other composers one would expect a Yeti to love. The films not only capture the music, they offer the Yeti’s insights on the music and its composers. They also feature extraordinary footage of the highest peaks and plateaus of the Chugach Mountains, with their glaciers, crevasses, cornices, and snowcaps, shot from the sky.

Of this wild endeavor, Cathy and Peter explain, “we made these films in Alaska’s Chugach Range before Tippet Rise existed to interest young people in classical music. Here, as a gift to our neighbors and visitors, in the snow at 12,850 feet, is Peter, who is much more interesting when disguised as a Yeti.”

We are pleased to present all seven films made that day on that icy, snowbound precipice in southern Alaska, including one that captures their making. To watch, and to learn more about the project, please click on “More info” below.