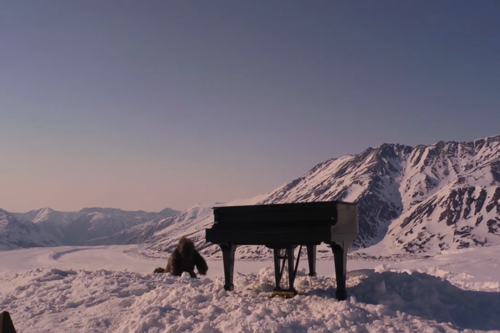 I wanted to repeat my climbs in the Himalaya with a piano for a book I was writing. (Some of the photos from those climbs can be found in my eBooks.) But politics change, and it seemed safer to do it in America. Most high mountains are in wilderness areas where you can’t fly a helicopter, but the Chugach are in a National Forest, right next to where they film the Valdez extreme ski movies. We scouted eight locations, and picked the one which remained calm enough to fly out of eight hours later.

The Steinway technician in Anchorage had a client who was moving a piano to California, so it was already crated. We flew it up to nearly 13,000 feet with one copter while filming it with another. As avalanches poured down on both sides of our pinnacle, we set up, filmed, and re-crated the piano over eight hours. Mickey Houlihan came dangerously close to the lip of the cornice, and his son Sean hung below the helicopter filming, because Mickey told him not to. The tuner finally admitted that we were all crazy. The Alaska papers carried the story, and NBC called, but we wanted to be more serious than the news would be.

Taylor Fraser later edited the Houlihan footage into an exciting film with the inspired choice of the Egmont Overture. I recorded the voice-over “on the fly” as I watched the films the second time at Mickey’s studio in Boulder, trying to match what I was saying to what I was seeing.

Here the Yeti intrudes discovers a piano on a mountaintop and throws its metronome in the snow.

As it was in 2001: A Space Odyssey, here is the beginning of the world told in music by Strauss (which is played by the Yeti.)

A small Yeti morphs from an awkward young beginner into a more polished artist in one short piece that Debussy wrote to show his daughter that practice makes perfect.

The great composer Schumann loved the young Clara Wieck, and put the simple theme she wrote into all his music (see the podcast, “Robert Schumann’s Clara Theme”.)

The great composer Brahms also loved Clara, and raised her children while she concertized. Unfortunately, he left her. To make up, at the end of their lives he put the theme she wrote into this beautiful Scottish ballade.

Beethoven wrote the Moonlight Sonata upside down, with the melody in the low notes and the accompaniment in the high notes. The Yeti plays the first movement at a life-or-death speed.