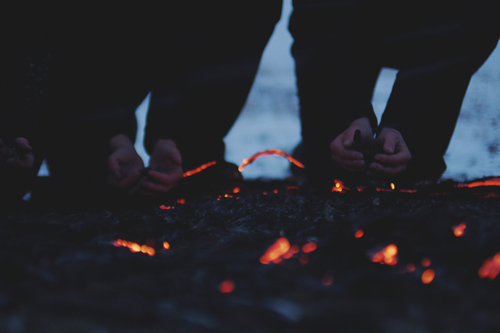 In “The Hive,” a dreamlike nine-minute film written and directed by Matthew McKee, black-clad figures approach the smoldering remains of a fire. There, they kneel, collecting handfuls of ashes and coals. Snow falls, the wind blows, cold practically radiates from the screen. The film’s monochromatic opening scene is interrupted by just one color: the amber glow of dying embers. “The Hive” then cuts to a dreamy view: a beautiful violinist playing in an empty concert hall within Stephen Talasnik’s handwoven hivelike sculpture. Lit from below, the luminescent structure glows amber, like the fire’s dying embers. We come to understand, by the film’s end, that it is the sculpture that has been burned, its ashes collected by the black-clad figures. Between the film’s opening and final scenes, we bear witness to its dismantling in preparation for the pyre. In the process, we become attached to it as one would a living, breathing character. 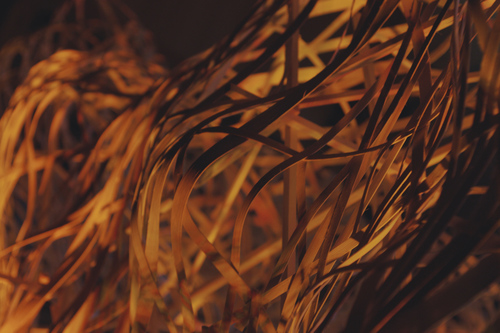 Rich with themes of transformation and transcendence, “The Hive” was filmed at Tippet Rise Art Center in the late autumn of 2018. The film’s stunning sculptural centerpiece is the eponymous Hive, created by the internationally celebrated artist, Stephen Talasnik, in the Olivier Music Barn at Tippet Rise for his October 2018 exhibit, Unearthed. The violinist was Angella Ahn and the haunting score we hear throughout the film is Aria, a piece written for Ahn by the American composer and violist, Kenji Bunch.

Matthew McKee, an award-winning filmmaker from the San Francisco Bay area, wrote and directed “The Hive.” McKee’s work, specifically a film he created for the San Francisco Ballet, had captured the attention of Tippet Rise co-founders, Peter and Cathy Halstead. They sought him out and invited him to visit the art center. Eventually they asked him to make a film using Talasnik’s then-upcoming exhibition Unearthed as its centerpiece. 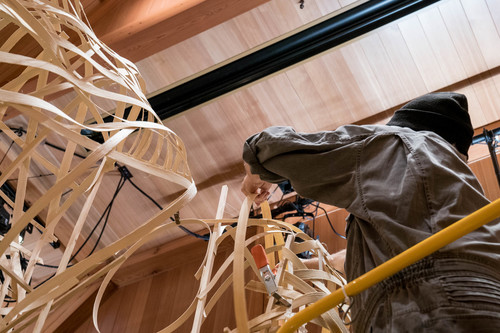 Stephen Talasnik at work on the Hive. Photo by Emily Rund.

When McKee visited Tippet Rise, he was “incredibly moved…I walked the land, I saw some concerts, and I felt the power of the landscape. I knew I wanted to do something bold and unique and Peter and Cathy supported this.” But he didn’t see Unearthed or the Hive during that visit. “It was summertime and the exhibition wasn’t up yet. The sculpture hadn’t even been created.” Nor did he meet Talasnik, who lives in New York.

“Stephen and I met by phone—we still haven’t met in person. At some point, he mentioned that he had burned some of his sculptures, to return them to the earth, and I was struck by that. It was really powerful. The fact that something could be an art piece at a moment in time and then…nothing. To put so much work into a piece and then to deconstruct it, to create space for something new, seems, to me, to be more difficult than the act of creation…It’s not easy to let go of our constructs. Not easy to take something down that’s been built.”

“To say, ‘I want to burn your piece’ to any artist isn’t easy,” McKee adds. “But to Stephen Talasnik? That definitely wasn’t easy. He’d never even met me, and he thinks very deeply about these pieces. To let go of his baby…to allow a person he’d never met to do this? But he said yes. I felt a deep sense of responsibility. I felt, too, that honoring the Hive in its transformation was very important to Stephen, and that became my challenge.” 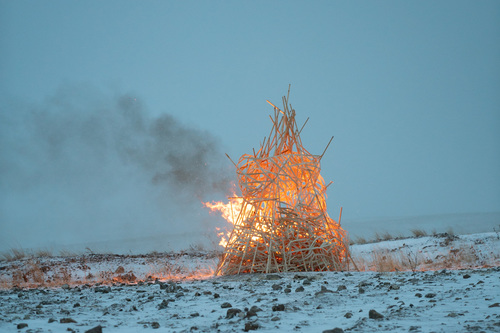 After the Unearthed exhibition ended, McKee returned to Tippet Rise to film “The Hive.” Production took just three days; before then, he had carefully curated every piece of the film’s puzzle: from the “Hive Five”—the figures dressed in black—to the hilltop site for the Hive’s incineration to the music, the Kenji Bunch composition suggested and played by Ahn, a piece McKee describes as “lyrical, vulnerable, beautiful—the perfect score.” 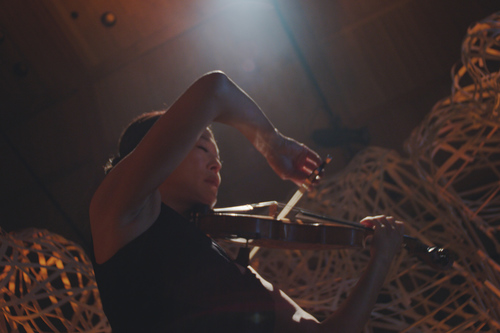 Angella Ahn performs within the Hive.

“‘The Hive’ allows my work to live on in some other form,” said Talasnik. “It’s a beautiful film. It’s like an opera without words. Watching the performances, watching the piece change with the lighting. It’s like watching Wagner, Mozart, Mahler…The sculpture wasn’t an easy piece to make. Peter and Cathy called it ‘magical.’ And it became up to Matt to take magic apart. He took something that existed, dragged it through his own psyche, and found something new. It’s thrilling to see how people take my work and give it greater depth of meaning. Matt did that…It’s always important that any work of art can transcend the moment it was created and achieve a spiritual connection with all humanity has to offer. I think Matt accomplished that.”

Ahn adds, “It is every artist’s dream to go on a creative journey with other artists. Experiencing Stephen’s incredible sculpture and its prevailing movement firsthand by performing within, collaborating with visionary film director Matthew McKee, whose foresight made everything seem easy, and filming in the blizzard amidst the stunning landscape of Tippet Rise. All these elements combine to make a magical film and I am so grateful to partake in the magic-making.”

“The Hive” has been screened at festivals around the world is now available online. To watch, click here. For information about the artist Stephen Talasnik, visit stephentalasnik.com. 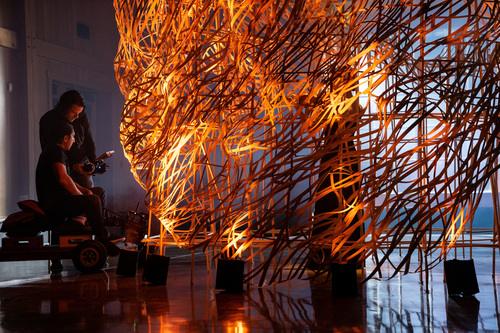 Filmmakers Matthew McKee and Matthew Piniol at work beside the Hive. Photo by Emily Rund.