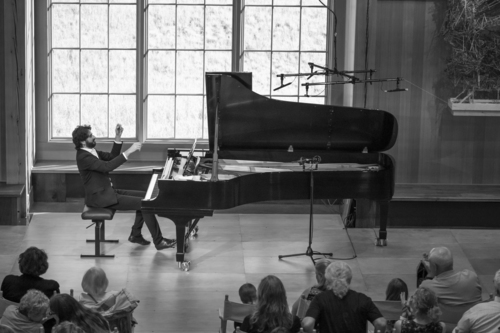 Julien Brocal performing in the Olivier Music Barn in 2019. Photo by Erik Petersen.

Julien Brocal was discovered by Maria João Pires, who invited him to the Queen Elisabeth Music Chapel in Belgium. From there he came to the attention of our friends Michèle and Jean-François Toulouse in Brussels. Julien came to Tippet Rise during an informal visit by Maria, who very generously played spontaneously for all of us; she and Julien performed Schubert’s gorgeous Fantasia in F minor
for four hands, and she played as well Beethoven’s Sonata No. 23 in F minor (the Appassionata), with her flawless and psychologically accurate elegance.

When Julien came to visit us that weekend, he was already a perfect Chopin artist, along the lines of Dinu Lipatti, and a fully-formed composer - part Mompou, part Pärt.

I was walking by Stillwater, our main artist residence, and I heard this beautiful Ravel coming from the piano inside. I went in and said to Julien, “What Ravel is that which I don’t know?”
He said, “It isn’t Ravel; it’s me.”

I asked Julien if he’d let us record it, and from there we went on to record his album, Reflections, of Ravel, Mompou, and one piece by Julien, Nature Morte, written at Tippet Rise.

Julien’s first album, Chopin: Les Etats d’âme, released when he was thirty, won the Album of the Month award and Newcomer of the Year from the BBC. As Maria-João Pires said of it, “Poetry, spontaneity, restraint and a profound sense of the structure and awareness of sound are rare qualities with which he is gifted.”

His album contains one of the great performances of Chopin’s Piano Sonata No. 2, we well as the 24 Chopin Preludes, all of which he performed when he returned the following year.

Julien made several films at Tippet Rise for which he wrote his own soundtrack: Snowing on the Moon for “Stainless Stealer,” as well as Reflections (for the film “Reflections”), and Daydreaming for the film, “The Gardener.”

He filmed two exquisite videos with the violinist Caroline Goulding, directed by Anderson & Roe, which can be found on our website: Beau Soir, and Fauré: Morceau de Lecture

In residence in 2019 he wrote Bright Golden Light and Water Wheels.

In The Gardener, Julien Brocal shares an introspective and hopeful perspective on nature, art, and human connection.

“Brocal is a musician of distinction whose imaginative, intelligent and cultivated piano-playing is at once seductive and authoritative. In fact, the perfection and maturity of his Ravel is little short of astonishing. Brocal’s sensitivity to the composer’s subtlest indications on the page allows his performances to take flight in a corona of shifting colours and moods. Miroirs unfolds in a seemingly inevitable trajectory. From the delicate fluttering of ‘Noctuelles’ through the distant resonances of ‘La vallée des cloches’, it as though we stroll leisurely through a gallery of master paintings. ‘Une barque sur l’océan’ rolls, swells and subsides in a play of brilliant sunlight on water. A lithe, animated ‘Alborada del gracioso’ gambols about in the freshness of morning. In the Sonatine, Brocal foregrounds Ravel’s precision craftsmanship in a reading filled with pellucid colours and shimmering textures.

The same fine ear and sensitive touch, in combination with a superb sense of timing, bring the two Mompou sets to life. ‘Charmes,’ a suite of gem-like miniatures, is particularly appealing. Brocal’s own tender, deeply affecting ‘Nature morte’ is offered as an encore.
….I urge you not to miss the opportunity to hear this singular talent.”

As Bertrand Boissard said so eloquently of it in Diapason:

“The hypnotic El Lago draws an increasing number of interpreters on disc: Andsnes, Hough, Tharaud… among whom Julien Brocal distinguishes himself by his finesse, his control of sound, not far from Arcadi Volodos (Sony: one more sorcerer of the piano!). The instrument which nearly steals the spotlight: the Steinway stamped CD-18 (CD for Concert Department), which the firm reserved for the exclusive use of Horowitz, and which belonged later to Eugene Istomin, fascinates by its timbres, both opulent and dazzling. The incantations of Charmes give off the same abundant sensations. And the Miroirs of Ravel? Fragments of crystal collide with one another (Noctuelles), sorrowful birds exhale their sighs endlessly (due to the exceptional sonority of the instrument). Nimble and zebra’d with spectacular glissandos, Alborada del gracioso finally gives way to the peaceful landscape of La Vallée des cloches…. There is nothing which calls into question the great sonorous seduction of this album.” 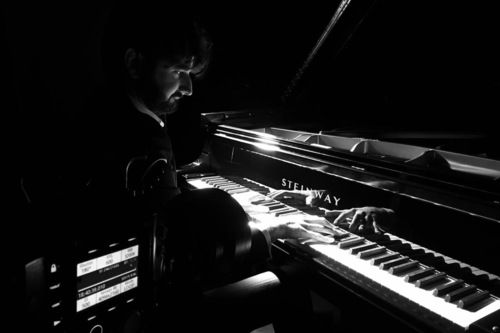 A still from the short film, The Stainless Stealer Steals the Universe featuring Julien Brocal.

“This is great Chopin, transparent and warm at the same time, fabulously played in both the left and the right, dosed with masterful touch and filled with an inexpressible longing for something that is impossible and yet lets it materialise somehow. In short, we are in the unfathomable realm of a Lipatti, Pollini, Blechacz sometimes even Cortot.”

As Christopher Axworthy wrote about Julien’s debut at Wigmore Hall in London:

“It was a magic sound world of such kaleidoscopic colours.
It opened our taste buds and it made us aware of every slight nuance of sound as Julien, crouched over the keyboard, coaxed the most wondrous sounds out of this piano.

The same piano that I had heard in the equally wonderful hands of Graham Johnson just a few hours before.

Leaning back too as he allowed his hands to caress the keys bringing out bell-like sounds that belied the fact that the piano is a percussion instrument where hammers simply hit the strings.

It takes a very special musician that can convince us otherwise.
His magnificent performance of the 24 Preludes held his audience spellbound on a journey of such variety, passion and rhythmic drive allied to moments of sublime beauty and calm.

It will live with me for a long time to come.

Fou Ts’ong describes them as 24 problems but in Julien’s hands they were 24 jewels in a crown of such radiance I doubt the Wigmore Hall has resounded with a performance of this stature for a long time.” 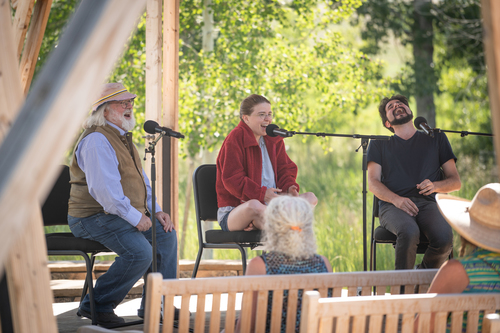 Julien then spent several weeks in residency at Tippet Rise in 2018, where he wrote Into the Wild, a pastoral piano solo which doesn’t so much describe the Montana landscape as create it inside the listener.

Julien had come up with the idea for le Jardin musical, where his friends would visit him in his atelier in Brussels for concerts. We were planning to join him there before the virus struck.

We are honored to be partnering with Julien in this wonderful enterprise. Already, his performance of the Schubert Sonata in A Major is as perfectly considered as his mentor, Maria João Pires. You have to hear his duets with the distinguished cellist Camille Thomas to understand the way he breathes together with both instruments, the way he anticipates the tiniest nuance of the cello.

We look forward to releasing Julien’s upcoming concerts and duets over the next year. We hope everyone who hears them will realize they are in a becalmed sea, an oasis, in what T. S. Eliot called the still point of the turning world. 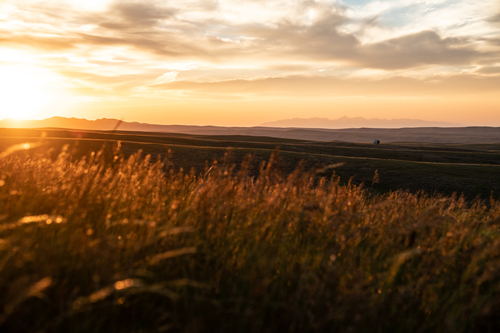