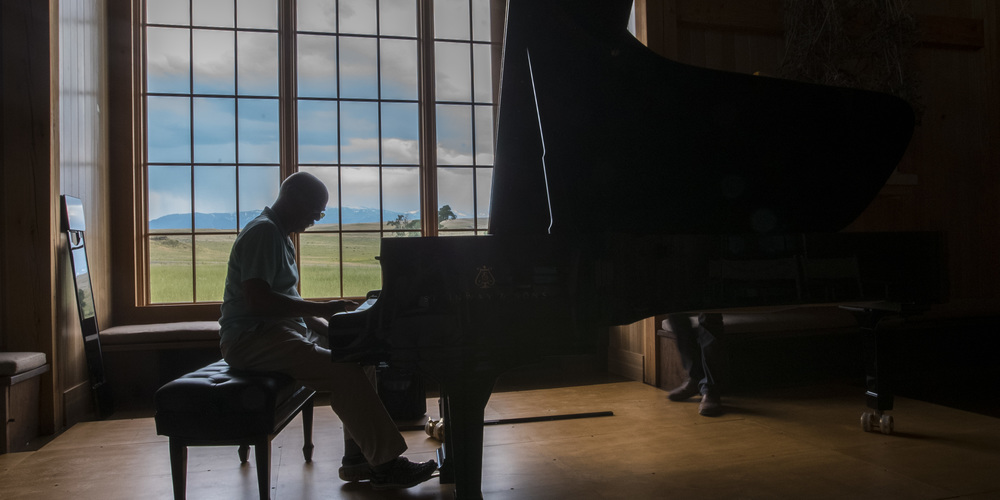 The Pianos of Tippet Rise

Today’s episode, produced by Naomi Lewin, is about the extraordinary pianos at Tippet Rise – including one that belonged to legendary pianist Vladimir Horowitz.

Michael Toia: This river here is the Stillwater, and it’s got some trophy fish in it. It’s just that they’re very, very hard to catch, because they’ve got teeth. I’m Michael Toia, and I’m the piano technician for Tippet Rise. People that come here say they’re the best pianos they’ve ever played. So it’s kind of neat that they have them here. Many of the artists are returns, and so we’ve developed a little relationship from the last year that they were here. So, we get together and we pick a piano that’s going to fit their performance, and then we just let them get comfortable with it. You’ve got to kind of fit the piano to their program, kind of steer them in the right direction. Because from working on them, you know what each one of them does, and what they’re best at.

Michael Toia: And Horowitz’s piano lives here, so that’s very special. Everybody wants to play the Horowitz piano, because you can feel the vibe coming off the keys. They get inspired when they play it, so a lot of them like that one.

Peter Halstead: I’m Peter Halstead. Tali Mahanor, who is the technician for Chamber Music Society of Lincoln Center, found us a piano that she had maintained for 17 years. She traveled to small towns all around America with Eugene Istomin. And when he died, it went into storage, and his wife Marta Casals Istomin, who had been of course married to Pablo Casals, she was grief-stricken, and felt, you know, no one else should really touch the piano. But we seem to be the perfect solution because it would be recorded on, it would be videotaped, and yet it wouldn’t be overplayed.

Peter Halstead: And Tali also restored the Horowitz piano to the point where it has the original Horowitz keyboard, which is just a tiny bit bigger than any other keyboard. And not every pianist can play it. You need to have a really big technique, and a really big hand to play that piano. But it has another action, where it has the standard keys and the new Steinway hammers, which are gorgeous. So it’s two pianos in one. The Horowitz piano was known as CD-18. CD means Concert Department, and it was in the basement of Steinway. And if you’re a Steinway artist, you have the right to go out there and choose piano for your concert. Only Horowitz was allowed to play CD-18.

Michael Toia: It’s a big bold piano. It’s got a lot of spectrum to its sound. It’s great for the French Impressionists. It’s a favorite. A lot of the artists really want to play that one.

Michael Toia: They call me a meat-slinger because I use worms sometimes, but I kind of think that worms is a neat way to catch them. When the artists come, a lot of times they’ll consent to be blindfolded. And we guide them in to each piano. We have three that they can choose from: the Horowitz, the Hamburg, and Seraphina – the “old lady” I call her. But when they’re blindfolded they’re kind of taken aback when they take the blindfold off. They go, “Oh, I picked this one?” When, you know, a lot of them are just picking with their eyes, instead of how it’s feeling to them. And a lot has to do with the program. Like I say, we try to steer them towards the best one for that, so they don’t have to fight, it just comes naturally, piano wants to play that kind of music. They each have their character.

Peter Halstead: Tali also found us two pianos from 1897. The 1897 pianos have what Tali calls the “zingy-zang.” Because the way they strung pianos in those days was: many piano notes are composed of three strings, and in the modern Steinway piano each string has exactly the same tuning, exactly the same notes. But in the older pianos, the stringing is slightly different. So they sort of fight each other, and they’re not exactly tuned the same.

Michael Toia: It came from eBay. It was located on eBay. One family had it since 1897, and it had constantly gone downhill, until they found it and were able to put it back into shape. I’m sure it was a monumental task. To me, it sounds better than a new one because it’s kind of customized. It’s a real diverse piano. You can get a lot of different – the spectrum on that one is really, really beautiful because it goes from whisper soft, to big and brassy. So you get a lot to work with.

Peter Halstead: It’s an earlier piano sound that has more warmth and humanism to it than the incredibly clinically perfect modern German and American Steinways. We also have a wonderful example of a great German Steinway.

Michael Toia: It’s good for Bach, especially, because it’s very clean and kind of a linear sound, because there was no sustain pedal at that time. It’s a great Hamburg, it’s not too – not too German. We’ve brought it back little bit, so that it fits the hall. It was a little bit large for the hall, so we had to kind of rein it in. The Hamburg is black and shiny, you know; Seraphina’s polished ebony – polished paint. The CD-18 is more of a satin finish. Those three pianos are more than they could imagine. I mean they’re floored when they when they play these three, and one of them always fits what they’re playing.

Michael Toia: Looks like something’s pulling on there. You got one? I got tired of starving as a musician, then needed something steady, so I decided this is, you know, basically what I know since I was little. I’ll just figure out how they work! So I was able to apprentice with a guy in L.A., and that’s where I grew up. And that got me started. Peter called me one day in Honolulu – I live in Hawaii – and we hit it off, and tuned his piano for years. And then the concept started with Tippet Rise, and did a job for him where he recorded Chris O'Riley in the studio. And that came out good, and they asked me to come for the first year here.

Michael Toia: All these artists – they have their own rehearsal piano in their room where they’re staying, and then we have a rehearsal space separate, with a concert grand in there next door to where they’re staying. And this concert grand is a brand new Steinway that Peter rushed to New York and picked when he heard that the company was being sold.

Peter Halstead: We have always loved pianos, and I’ve always hated the fact that “the piano that got away.” That you play a beautiful piano and you didn’t buy it. What was that about? And we, at this stage, got an opportunity to buy a few pianos for the Art Center, and we went to Steinway and bought three instruments. And they lined up 13 pianos for us at the factory, and each piano was better than the next.

Michael Toia: So he ran back and got these pianos, one of them is our rehearsal piano, and the other one is in the big house which we call the Tia House on the other side of the ranch. Usually, quartets will stay there because it has two pianos, if they’re doing four hands they have that luxury of having two pianos there. We have 12 grands and one upright. Of the 12 grands … let’s see, 1,2,3 – nine of them are concert grands, and we have 3 seven-footers. The seven-footers are in the residences, and we have one that we use outdoors.

Michael Toia: It’s stored in air conditioning. We keep all our pianos climate controlled. Everything’s in 40% humidity, and 70º climate control. So when they take them outside, it goes from 40% humidity to about 15%, and it goes to about 90º – 100º. And piano doesn’t like that. Yeah, so as a rule of thumb, if you’re comfortable so is the piano.

Michael Toia: I don’t fly fish – I use these wooden plugs that imitate baby brown trout, because they’re carnivores, and they like big. I love serving musicians trout. I get a kick out of it. A lot of musicians never fished in their life. And I love taking those guys down, and getting them their first fish, because it’s a new experience for them and they really – they’ll remember it forever. Almost all of them are totally caught off guard as to how can it be happening here in Montana, that you have Horowitz’s piano, and all these other great pianos. I mean these are – I would call them exceptional pianos, specially worked up for high performance. So when the artists play on them they’re able to do just about any nuance that they want.

Michael Toia: When they get to their performance, they’re pretty in tune with what they’re playing on, and then just knock it out of the park. It’s great. Very rarely do they get a piano to play on like the ones we have. So they’re very anxious to come and come back again. Or to steal a piano!

Michael Toia: Yeah, I mean I get to fish. This is a great spot. It’s one of the best areas that I’ve fished for brown trout. And it’s, to me, very much like Hawaii, that I can come down here and enjoy the vastness of Montana, and listen to the stream – it’s like listening to the ocean. So it’s a treat for me. And it’s great working with all these artists that are just phenomenal. I don’t think we’ve had a bad show in three years. These pianos that they’ve brought in are really world class, they’re one-of-a-kind. It’s quite a place they’ve made here. They’ve changed the neighborhood. It’s just been a great ride. I mean I love it. I pinch myself every morning, to see if this is for real.