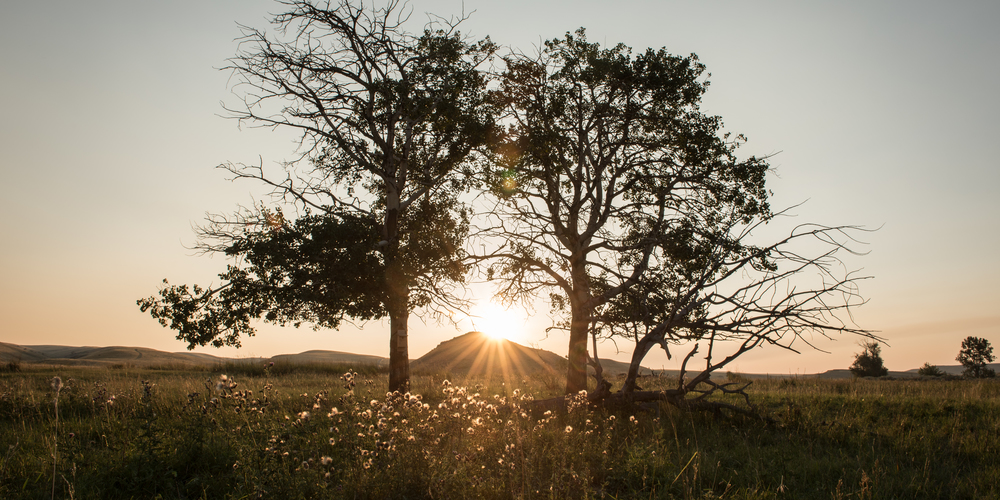 Passed down through centuries, storytelling is a distinctively human tradition that doesn’t always rely on spoken language. In this episode, we explore narratives that tell stories using just musical sound. Featuring music by Maurice Ravel, Modest Mussorgsky, and George Enescu.

DEVANNEY HARUTA (HOST): Once upon a time, not that long ago, musicians and audiences from far and wide gathered at Tippet Rise Art Center in Fishtail, Montana. These musicians and audiences were carrying on a tradition that has been an integral human activity ever since the beginning of recorded history: the tradition of storytelling. It’s a tradition passed down from the ancient Greeks, who broke out their lyres to accompany the singing of lengthy epics. It’s a tradition that passed through the voices of medieval troubadours, who later broke out their lutes to tell tales of heroes and lost loves. And now, barely a thousand years later, we’re carrying on this tradition, as we listen to podcasts on our cell phones, or watch movies in surround-sound theaters.

Music is often seen as supplementary to language when it comes to the essential elements of a story. The music might hang out in the background, but its main function is to enhance the words, which carry the narrative. The narratives told at Tippet Rise, however, were a little different. Among the rolling hills of Fishtail, it was not language, but rather music that was telling the stories.

You’re listening to Tippet Snippets, a podcast that explores the music, art, and nature of Tippet Rise Art Center in Fishtail, Montana. I’m Devanney Haruta, and in this episode, we’ll explore a selection of musical works that tell narratives using just musical sound.

Let’s start with Ravel’s “Mother Goose Suite,” which he wrote in 1910. Each movement is a musical telling of a children’s fairy tale. One of the movements is titled “Conversation of Beauty and the Beast.” In the inscription that prefaces the music, Ravel writes out a full conversation between the two characters. Translated into English from the original French, it goes something like this:

“When I think of how good-hearted you are, you do not seem to me so ugly,” says Beauty.
“Yes, I have, indeed, a kind heart; but I am a monster,” replies the Beast.
“There are many men more monstrous than you.”
“If I had wit, I would invent a fine compliment to thank you, but I am only a beast. Beauty, will you be my wife?”
“No, Beast!”
“I die content since I have had the pleasure of seeing you again.”
“No, my dear Beast, you shall not die; you shall live to be my husband!”
The Beast had disappeared, and she saw at her feet only a prince more beautiful than Love, who thanked her for having broken his enchantment.

Ravel takes this story and transforms it from language into music. In just a minute, listen to the musical lines within the wind quintet that performs this piece: We hear two voices – Beauty’s and the Beast’s – in the clarinet and the bassoon, respectively. The clarinet starts off with a graceful melody, and the bassoon responds with a stumbling descending chromatic line. Underneath this dialogue, the rest of the ensemble sways back and forth with a gentle waltz rhythm.

But wait, remember the end of the conversation? The Beast is about to transform into a beautiful prince… Listen for the shimmering glitter of the flute: the magic spell has been broken, and the once clumsy chromatic line is now charming, and fit for a prince.

If we could compare Ravel’s “Mother Goose Suite” to a bookshelf stocked with storybooks, then we could say this next piece by Mussorgsky is like a gallery with pictures hanging on the walls. Well, this is more than just an analogy: the piece “Pictures at an Exhibition” was inspired by an actual exhibition of drawings and watercolors by artist Viktor Hartmann, a close friend of Mussorgsky’s. He composed the music in 1874 but since then, unfortunately, many of Hartmann’s drawings have been lost. We can still imagine what they might have looked like, and at least we can hear what Mussorgsky thought they sounded like. Each movement depicts one of Hartmann’s images, and in-between the pictures, we hear this theme, the “Promenade,” which is Mussorgsky walking through the gallery, from one picture to the next.

At a concert in late July, pianist Natasha Paremski introduced her performance of this piece with a perceptive observation about the relationship between the Promenade and one of the Pictures.

NATASHA PAREMSKI: So imagine, when you see “Promenade,” that means you’re walking, okay? And it’s the same theme over and over again. But it’s always got a different feeling to it. So, my interpretation of that is, that is actually Mussorgsky, and that’s his reaction to the picture. And one of my favorite, most interesting reactions – and this has to do with, sort of, word play – is “Bydlo,” which is translated as cattle, yes, but “Bydlo” in Russian also means a herd of very, very stupid people. Can’t form an opinion of their own in any way…

PAREMSKI: Yes, well, you have cattle, literal cattle. But, based on the fact that the Promenade that follows “Bydlo” is actually quite sad, I think Mussorgsky meant the people thing. I think he’s disappointed in human kind.

HARUTA: The “Promenade” that Natasha’s referencing shows up in a minor key, which gives it a pensive and melancholy mood. Let’s listen to Natasha play an excerpt of “Bydlo,” the 4th picture in Mussorgsky’s exhibition, and the Promenade that follows.

Okay, so we’ve got a suite of fairytales, an exhibition of pictures… what other kinds of musical narratives are out there? George Enescu, a Romanian composer from the early 20th century, adds to our musical storybook with a piece called “Impressions from Childhood.” This is a set of ten images, inspired by his native Romanian folklore, that depicts a day in the life of a child. Individually, each image is just an image – of birds, of a garden, of a storm. But it’s the way the images transition from one to the next that makes Enescu’s collection a cohesive narrative.

At the beginning of the piece, we wake up to the morning song of a Country Fiddler. [musical excerpt]

Then we wander outdoors to the Brook at the Bottom of the Garden. [musical excerpt]

Outside, in the afternoon sun, birds chirp in the trees. [musical excerpt]

And inside, we hear the cuckoo clock call out the hour. [musical excerpt]

It’s getting late in the day, and the sun has set. In the evening moonlight, a cricket chirps outside the window. [musical excerpt]

But then, a storm rolls in. [excerpt]

And finally, the next morning, we wake up again to the sunrise. [excerpt]

These pieces – Ravel’s suite of fairytales, Mussorgsky’s exhibition of pictures, and Enescu’s childhood impressions – are just three examples that use musical notes to say “once upon a time.” Of course, there’s no way to directly translate these narratives into words, but nevertheless, the sounds still draw us into the world of the story.

Modest Mussorgsky: Pictures at an Exhibition – “Bydlo” and “Promenade”
Performed by Natasha Paremski