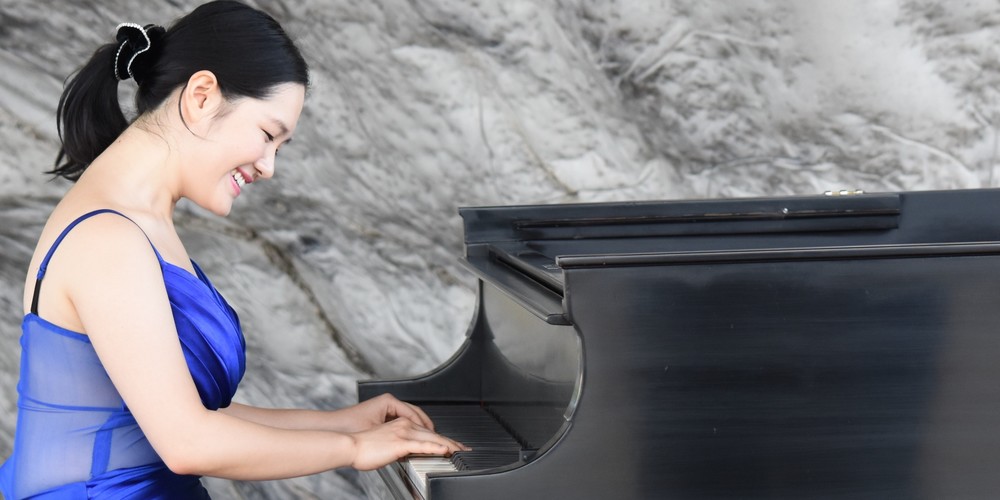 Jenny Chen: A Devotion to Music

From the youngest student at the Curtis Institute of Music to a veteran performer at Tippet Rise, Jenny Chen lives a life of musical dedication and discovery.

Transcript:
00:03 JENNY CHEN: (singing) This is a lovely way to spend an evening. Can’t think of anyone as lovely as you.

00:27 ZACHARY PATTEN: A simple start to a serious piano program. For the past four years, pianist Jenny Chen has been building a large following of adoring fans at Tippet Rise and across Montana. Although she performs some of the most difficult repertoire, her charm, authenticity, and infectious smile easily tear down the possible barriers between the performer and the audience. In this episode of the Tippet Rise Podcast, Jenny Chen discusses her history, dedication, and devotion to music, which unify to serve her greater purpose to connect with you. And as Jenny says, “To share souls in music.”

01:09 JC: Even if I have a concert every day, I still want to make every performance my best effort. It’s kind of a challenge to myself at the same time. When you have so many concerts, there’s not much time to think and not much time to practice. But, it is a way you can push yourself forward and be a better person by doing so. By practicing more and soaking in the practice room, you can discover more details in the music and read more carefully in the music. To me, it’s more like a total devotion to the music and to the art, so that I can bring a better experience and the best quality I can make for the audience. I think that’s really important.

02:05 ZP: Although Jenny graduated from Curtis, Yale, and has nearly completed her doctoral work at Eastman School of Music, her relentless work ethic has been a constant since an early age.

02:17 JC: When I was really little, this was in Taiwan, my home was a four-story building. On the first floor is my father’s office. He is a businessman. The second floor is my practice room and my mother’s piano studio. The third floor is my room, my brother’s room, and my grandma and grandpa’s room. The fourth floor is my parents room. While my father works on the first floor, he always listens if I’m practicing or not, because I am on the second floor. He’s really strict! Once I stop playing the piano for maybe ten minutes, he would run from downstairs and come look at me to see if I am practicing! That was when I was little. I think there’s a lot of Asian kids who have the same experience. Of course when we grow up, I have more freedom. My father understands me and it’s different now. I still have the same attitude of immersing in the music and find the reality, the most truthful way, of playing the music.

03:37 ZP: Along with truth in music, Jenny reflects on her personality traits and talks about the incredible challenges of being separated from family at such a young age.

03:46 JC: The truth is I’m a very obedient kid! Whatever my parents say, I would just do it. They gave me goals, like, they applied to Curtis for me, and then I have no other choice. I just have to do it! I have to go and challenge myself.

04:09 ZP: At age 10, Jenny completed the rigorous three audition stages of the elite Curtis Institute of Music and became their youngest student. Out of two hundred and twenty-five applicants, she was one of only five pianists selected.

04:23 JC: Around the time when I was between eleven and sixteen years old, my parents had a visitor visa, so they could only visit me for six months, then they have to go back to Taiwan. My parents were taking turns to take care of the little me. So it was difficult. They called each other on the phone everyday because my parents were separated. My mom would call and cry, sometimes with a bottle of wine, to forget the pain! It was a really painful experience.

05:03 ZP: Not only did Jenny’s family experience separation because the distance between them, given the severity of her father’s health condition, they also faced the potential of permanent separation.

05:14 JC: My father was diagnosed with fourth stage lung cancer three years ago. He was told by the doctor that he only had three months to live. I remember that night was the same night that he coughed up a lot of blood. I thought “Oh, my God, that’s the end of it.” That night I hugged him tightly. He cried and I cried because we were both afraid that we were going to lose each other. Afterwards, he went back to Taiwan and started his treatment of radiation therapy. The treatment that made his lungs weaker. He has this mindset of he has to live for the family. He’s ready to die anyway, but he’s not ready to leave us, the family. Every morning he forced his body to do exercise. He does stairs every morning. In the hospital you have one big floor of twelve stairs or more and he would walk those every morning. He eats healthily and goes to bed early so that he has enough time to rest. It’s this determination that keeps him alive today. It’s been three years and he’s living healthily today! This is the attitude and this is the inspiration and motivation that drives me and makes me find my purpose in life.

07:10 ZP:Complementing the inspiration from her father, Jenny’s mother showed her how to conquer fear.

07:16 JC: My mom raised me and she’s very proud of me because I’ve been kind of “speedy” about education. She went with me to China. She was a lecturer of the festival. She was afraid that the things she said might not be successful and people might “boo” her. She was really afraid. So, she was just herself and told stories of how she raised me. At the end, it was really successful. Now, there are two or three kids from China that want to come study with me in America because of her. She helps me a lot and is really great. That tells me to not be afraid. When you do it, then you did it! You don’t know what can happen - it’s just a miracle! You never know your limits. Always try new things and don’t be afraid.

08:17 ZP: In a serendipitous twist, that same fearlessness and work ethic set the stage for Jenny’s introduction to Tippet Rise.

08:23 JC: I was performing at the Bravo Vail Festival. I was actually covering for another pianist, Fei Fei Dong, who was the piano fellow that year. She had visa issues in China. I had to replace her and play a couple of concerts for her. I played Petroushka and I danced Petroushka after my performance. That’s how I met Peter and Cathy.

08:53 ZP: In her Tippet Rise debut, Jenny concluded the concert with three movements from Stravinsky’s Petroushka.

09:01 JC: You know, some pianists have a signature piece that they take with them to competitions or when they give performances. It’s the piece that really suits them best. I think Petroushka is my signature piece. Petroushka is a character. He’s kind of like the hero of this whole story. He is supposedly a jester who is funny, humorous, and dances in a weird way. His master is a magician who plays his flute and then the magic will make Petroushka, the ballerina, and the moor dance. The first movement of the piano version of Petroushka is them dancing. The thing that the magician doesn’t know is Petroushka’s inner soul. He has a human soul and he’s hurt when the ballerina likes the moor but rejects Petroushka. He felt really sad with a lot of anxiety. That’s what humans feel. He’s not just a puppet. He’s designed to be a puppet, but he has a soul. Only in the room, when people can’t see him, he is able to release his emotions. Petroushka is a true soul. I think, in some way, I have the same sensitivity as his soul. I’m very true to every person. Sometimes you can’t be your true self in public. You kind of have to make other people happy and maybe you are not as happy. But, you have to be able to influence other people. When he was dancing he was happy and joyful. Everyone was very curious about this puppet but inside his inner life, there was a different person.

11:26 ZP: Unlike Petroushka’s story, Jenny strives to create an openness in her concerts and through doing so, she imagines the unification between the audience and herself.

11:35 JC: I am a very sociable person. I like the public, so I do share intimate music with the public. I don’t feel any pressure because it’s like talking to a friend, where people are listening to you and you are communicating with them through the language of music. We all share the same language. We are all “in tune.” I am in a level where I play music and I raise this level. Let’s say this is like a pitch. Other people have their own personalities and their own life. But when they come to join me in my world - when I’m in this “pitch.” They are also in the same pitch with me.

12:28 ZP: Being a concert pianist, it’s no wonder that Jenny explains this unification with a hand metaphor.

12:34 JC: Everyone is kind of like five fingers. They have different lengths. But, we are one hand. No matter who you are, we are in one unified universe.

12:47 ZP: Like the five fingers of a hand, Tippet Rise is the unification of art, music, land, sky, and poetry, and the artists who visit have time to connect with these elements. This marks Jenny’s fourth year to perform at Tippet Rise.

13:02 JC: Throughout the years I’ve really fallen in love with everything here, especially the piano and the people. When I practice, I have my own little lodge and my own kitchen. There’s always food in the fridge and there’s the dining hall next door. The environment itself is so friendly and lovely. I think it really helps me to practice. Psychologically, it’s really relaxing. I like to open my windows and there are so many windows in my little lodge. I listen to the birds, nature, crickets, butterflies, or bees. But when I practice, it’s much more beautiful. This nature really makes you meditate more and think more. When I practice, I can be in the best shape. It’s really quiet here, too. You can listen to the music at the same time you can listen to the birds. Your music is being accompanied by birds and everything out here. There’s so many things! It’s nice! It’s a special place and it’s so beautiful here.

14:32 ZP: Tippet Rise is closed for 2019. But for details on 2020’s events at the art center, please subscribe to our e-newsletter. We hope that you visit the Tippet Rise website frequently where News, podcasts, films, and many other glimpses, and insights are added regularly.

14:48 JC: Bringing classical music and the best musicians to this area is really incredible. In order to listen to great musicians, most people travel to Carnegie Hall or other places. But, here in Montana, it’s a triple experience: the art, the music, and the nature. I just love coming here.