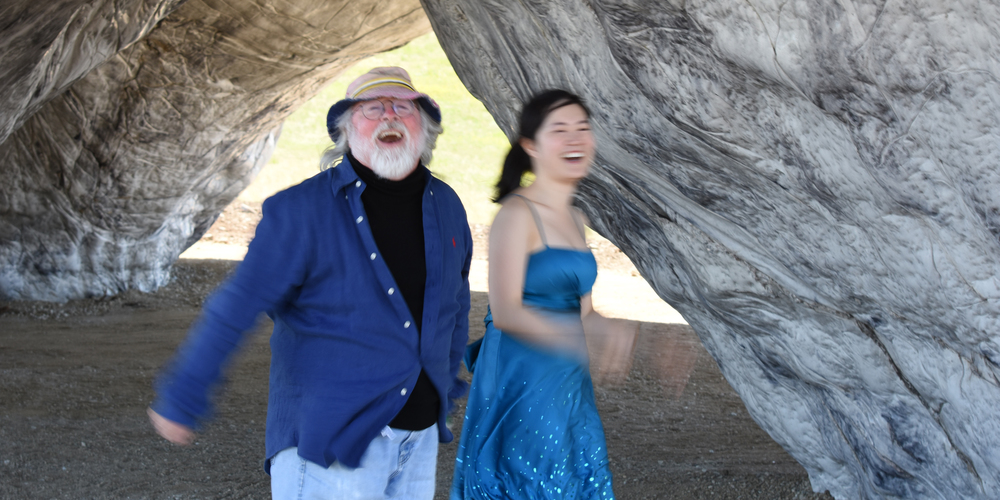 How I Became a Fanatic

Tippet Rise Co-Founder, Peter Halstead, shares his passion for playing and recording music through some inspirational moments of a fifty-year musical journey.

Engineered by Jim Ruberto
Written and Narrated by Peter Halstead

00:35 PETER HALSTEAD: This is a rough outline of the path my life took from my grandfather’s Chickering piano to Horowitz’s piano at Tippet Rise. As all pilgrimages are, mine was cobbled together from the places I lived and the people I met. Where we end up is made of all the places where we’ve been. In my case, the pianos I’ve known.

00:58 I came to recording through the piano. After I basically destroyed my grandfather’s Chickering by pounding Beethoven sonatas on it for years, around 1969 I ended up in Boston, and bought a 1928 Steinway B, a seven foot piano. 1928 was apparently a great year for pianos. It had a beautiful, old-fashioned sound, which reminded me of the recordings of the 1940’s and 50’s I had grown up with, such as the Beaux Arts Trio, Richter’s Beethoven, Dinu Lipatti’s Chopin.

01:32 I put it in my first apartment in Boston, and had the chutzpah to invite over a few piano faculty members from the New England Conservatory of Music and play some of Saint-Saëns’ 2nd Piano Concerto in G Minor. The result was that young pianists started practicing in my apartment. Violinists asked me to record their audition tapes. Russell Sherman, who had been brought to Boston by Gunther Schuller to head the piano faculty, and who later became my teacher, decided he wanted to record Bach’s Well-Tempered Clavier on it.

02:10 At that time, Boston was an incubator of young musicians. Some went on to performing careers, John Harbison and Craig Smith founded choral groups, Henry Kloss recorded John Harbison, and David Satz recorded Rudolf Kolisch, the legendary Viennese violinist who had studied with the composer Arnold Schoenberg. Schoenberg became his brother-in-law. Kolisch gave the first U.S. performances of Bartók’s Music for Strings, Stravinsky’s Histoire du Soldat, and Schoenberg’s Chamber Symphony No. 1. Craig Smith, who also studied with my teacher Russell Sherman, recorded Bach cantatas every Sunday at the Emmanuel Church. Henry Kloss, who had founded KLH, he was the K in KLH, started the Advent Corporation in Cambridge in 1967 and started making vinyl records and cassette tapes of John Harbison’s music. So recording was in the air. I saw it as a way of preserving my playing. While I was doing it, I also thought I’d like to share it with my friends.

03:21 One of my classmates at boarding school was Peter Lieberson, who became a composer. His father, Goddard, ran Columbia Records. Goddard was a very elegant man who created single-handedly the concept of modern classical recording. He recorded his piano teacher, who might not have become Igor Stravinsky without the support of Columbia Records. Lieberson also recorded My Fair Lady, and financed classical music with the proceeds from Broadway musicals and rock and roll. When Clive Davis came in and realized that only rock and pop made money, he fired Columbia’s classical producers.

04:03 That began the great era of independent classical companies, because suddenly all these very experienced producers needed work. I got to work with Tom Frost, who recorded Horowitz, and who now records Hilary Hahn and Gordon Getty. With Wolf Erichsson, who did Sony’s opera productions in Europe, and who founded his own company, SEON. He recorded the harpsichordist Gustav Leonhardt and Heinz Holliger, the great oboeist. Tony Faulkner recorded Kiri Te Kanawa. Judith Sherman recorded Music from Marlboro and all the new composers, like John Adams, Philip Glass, and the Kronos Quartet. She was nominated for 15 Grammys and won 10.

04:53 It was Wolf Erichsson who led us to build our first studio, in Bedford, New York. I gave Wolf two B&K 4004 omni mics to record the Liszt Sonata with Russell Sherman in the Wellesley chapel in Massachusetts. The chapel is very reverberant, and so Wolf ultimately cut out the chapel completely and only recorded a very dry, anechoic Liszt, the opposite of the lush way Sherman played the piece, and the reason I wanted to record it. When I play the record back in a lush space like my second studio in Edwards, Colorado, it adds back in the lushness of the chapel, and it sounds great, but the CD by itself is extremely dry.

05:43 But the Liszt record was the opposite of what I was hoping for, so I decided to take control of more aspects of the recording process. Cathy and I built a studio in a barn to make the sound we wanted, although the barn was too small, really. I used my Steinway D to make sure the piano was beautiful with a great action, and I bought all the gear, so I could use the mics I wanted and the most up-to-date technology, which at that time was Sonic Solutions, later bought out by Pro Tools. I used a lot of tube gear and reverb for the very human quality of its sound.

06:23 When we moved out west, I built a larger studio. When we decided to leave Paris, we happened to be building a large tractor barn in Colorado which we decided was too nice for tractors, and so we put the Paris piano in it. It was at an altitude of 9,000 feet, and ringed with mountains. When Cathy’s father died, I realized we’d be in New York for a long time, so I recorded every piece I knew at the time in that barn with Pro Tools on a Macintosh and four Neumann M50 omni tube mics, which is where all my albums come from. It’s hard for me to play at an intense level for more than six hours a day, so I recorded for six hours a day for four days, and then we had to leave. It was four years before I got time to listen to and edit the files.

07:19 When we decided to build an art center for outdoor sculpture in Montana, Cathy felt very strongly that it needed a concert space. We hired Arup engineers and acousticians, and it turned out that the lead acoustician on our team there, Alban Bassuet, had done an extensive study on 18th-century classical recording spaces, such as the Jewelbox built for Haydn by Prince Nicholas Esterhazy in Hungary. Alban had also designed a studio where you could listen to the shapes of rooms at Arup in New York. You could play pieces recorded specially without any acoustics in a neutral room called an anechoic chamber, and as you changed the dimensions of the rooms in the computer you could hear the new sound of whatever instrument you chose. We always came back to the power that the Jewelbox brought to a solo piano, violin, and cello. We wanted the sound to be not expansive, but intensely focused.

08:28 Two pianists influenced my ideas about recording: Russell Sherman and Glenn Gould. Russell Sherman approached Cathy and me to help him with an opportunity he had to record Beethoven with Pro Arte Records, which later became Intersound.

08:39 When Russell left Intersound for Peter Kermani’s Albany Records, led by the wonderful Susan Bush, we continued to produce his records there. During that time, we collaborated with Tom Frost, Wolf Erichsson, Tony Faulkner, and Judith Sherman in recording Russell. I did logistics, troubleshot, fixed recording gear when it broke. I took photos for album covers, and wrote copy for the brochures. I edited Russell’s brilliant book, Piano Pieces.

09:13 I went with Russell to Berlin, where we were hosted by the Berlin Conservatory. When Sherman got a chance to record the five Beethoven piano concerti with the Prague Philharmonic under Vaclav Neumann, it turned out that he didn’t like the piano which was in the hall in Prague. So we decided to travel the Berlin Philharmonic Hall and pick out one of their pianos. They didn’t lend out their best piano, but we got the second best, which Sherman called Lola Montez. He felt it had different voices for different moments, and was very voluptuous.

09:49 The piano sounded too much like another instrument in the middle of the orchestra, and I decided the microphones had to be moved. I had to speak with Neumann, the conductor, then the recording engineers at the Czech national recording company Supraphon, then producers at the supervising recording company, which was Deutsche Harmonia Mundi, and, finally, an official at the Kremlin who was in charge of the hall. After a few weeks of negotiations, we got to move the microphones a foot. I was told that it was the first time they’d been moved since they were installed. If you listen to the set of concerti, the last two reflect the change of microphones, and the piano becomes a gorgeous instrument.

10:35 I didn’t know Glenn Gould, but, like most pianists who grew up in the 60’s, he was hard to miss. When he retired from performing to concentrate on recording near his home in Canada, editing his Columbia albums by phone with his producer Andy Kazdin in New York, I felt the career model for classical artists had been disrupted, although disruption wasn’t even a concept back then.

11:02 Glenn Gould felt that the “non-take-twoness” of the concert stage didn’t allow him any flexibility. You didn’t have a chance for a second take, to play the notes a different way. Concerts make every passing impulse permanent; but Gould had second thoughts. As Hamlet said, “I could be bounded in a nutshell, but that I have bad dreams.” Bach has many voices, and you could bring more of them out if you could record several versions and choose the one you want after the fact. Gould felt that the concert stage introduced the observation principle, where the observers, the audience, influenced his performance. The floodlights put his life on the line.

11:55 A concert is an out of the body experience. Many performers don’t even remember the concert: their friends have to tell them how it went afterwards. They blank out and play by remote control. A concert in an important hall like Carnegie Hall becomes sheer muscle memory. You don’t think, or make choices. It’s total terror, and only the years you spent practicing get you through.

12:21 You suddenly see yourself as others see you. As Freud said, we see ourselves as others see us.” You hear yourself play, not with your own ears, but with the ears of the audience. You notice imperfections you never noticed before. New voices haunt you. But you don’t dare to “disturb the universe.” It’s too late to change anything. So, as Steuermann, Sherman’s teacher, said to him at his first concert, “Play it straight, Buddy.” Buddy was Russell’s nickname. “Play it straight, Buddy.”

12:55 But Sherman came to believe the opposite. You had to be rethinking and re-composing the music as you performed it; you had to astonish yourself, not just the audience. The timing came from doing it in a split second spontaneously at the last moment. In a similar way, Horowitz was under enormous pressure to play things better than he could. When I asked my New York piano teacher, Irma Wolpe, how a Horowitz concert had gone, she said to me, “Ach, he vas trying to be Chorowitz!”

13:30 We create a new face for ourselves when we play in public. As Wallace Stevens said about Penelope and Ulysses in his poem “The World as Meditation,” “She has composed, so long, a self with which to welcome him.…”