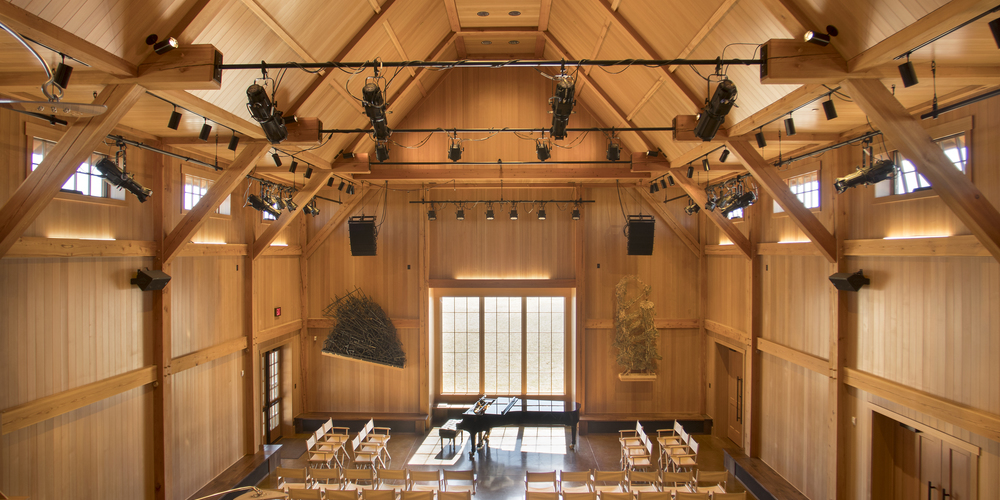 Like a dessert at the end of a satisfying meal, the encore can be a delightful finish to the close of a spectacular concert. In this episode, we hear a selection of encores from Tippet Rise’s summer 2017 concert season.

DEVANNEY HARUTA (HOST): It’s the end of yet another spectacular concert at Tippet Rise. The audience is on its feet, clapping and cheering. The musicians bow, they thank the audience, and they walk backstage… And the applause continues, and they come out for a second bow, and then a third. These moments during the performer’s final bows are always colored with a hint of suspense. Is the concert finished? Or are they going to play an encore?

You’re listening to Tippet Snippets, a podcast that explores the music, art, and nature of Tippet Rise Art Center in Fishtail, Montana. I’m Devanney Haruta, and in this episode, we’ll feature a selection of encores played at Tippet Rise this past summer season.

MICHAEL BROWN: I will now play…

GOULDLING: It’s from the E minor Sonata by Mozart.

HARUTA: This is the encore: the music performed after the musicians have finished their programmed concert. We thought it was over, but then the musician sits back down at the piano or picks up their violin and plays one last piece. The encore is often one of the most exciting moments of the concert. The piece they choose to play will be a surprise. Unlike the rest of their program, the encore is usually chosen day-of, or even in the moment. It will be something dazzling, perhaps, or maybe amusing, or touching, or just plain impressive. It will be something short but sweet, like a dessert after a satisfying meal.

In a tradition that has become somewhat serious and formal, encores at classical music concerts are special moments of connection between the performer and the audience. If they liked what they heard, audiences will clap to show their enthusiasm, and then with enough energy from the crowd, the musician might choose to respond by gifting the audience with even more music - in the form of an encore.

Encores are most frequently performed at solo recitals, such as the ones here at Tippet Rise. Perhaps influenced by the intimate setting of the Olivier Music Barn, some musicians choose encores that have personal significance. After a virtuosic recital of Bach and George Crumb, cellist Alexander Chaushian shares with the crowd music from his home.

CHAUSHIAN: Ladies and gentlemen, thank you very much for coming. Since I am from Armenia I’m going to play a little Armenian folk piece.

HARUTA: After the resonant harmonies of the J.S. Bach cello suites and the modern dissonances of the George Crumb that appeared earlier on the program, Alexander’s encore is refreshingly lyrical. The way that Alexander closes his eyes and relaxes into his cello shows that he’s not playing from notes on the page, but notes from the heart.

At another cello recital later in July, cellist Zuill Bailey selects an encore that has ties to his family.

ZUILL BAILEY: I have a sister that’s a violinist, and growing up she played this piece that just mesmerized me, and she played it so beautifully, so I decided to transcribe it for cello. This is the Meditation from “Thais” by Massenet.

HARUTA: This piece was originally composed for a violin solo that appeared in Massenet’s opera “Thais,” which premiered in Paris in 1894. The solo, backed by the gentle waves of an orchestra, provides a musical backdrop for the opera’s heroine as she searches for spiritual clarity.

First impressions are important, but when it comes to encores, it’s the last impression that counts. As the closing piece on the concert, the encore has the power to transform the atmosphere of the room. The encore is the melody that people will be humming as they leave the hall, and it’ll set the mood for the rest of the evening. Zuill’s recital program featured dense and ponderous music by Russian composers Rachmaninoff and Prokofiev. After these works, Massenet’s calming and gentle Meditation makes people lean back in their seats and smile.

While Alexander and Zuill choose encores that are lush and meditative, other performers close their concerts with a burst of energy and flair. [audience clapping] One Saturday evening, Jenny Chen ditches her elegant, floor-length gown for a short black dress. After her seamless costume change, she bounces back into the concert hall, clapping her hands and encouraging the audience to join her. She kicks back the piano bench and plays, standing, in her bright red heels, this flashy and dazzling “Libertango” by Piazzolla.

HARUTA: This piece symbolizes Piazzolla’s break from composing in the tradition of the classical tango. The title, “Libertango,” combines the Spanish word for freedom, libertad, with the name of a popular dance, the tango. Jenny brings this fusion to life in her performance, as she practically dances at the keyboard with irrepressible energy. Piazzolla’s fresh modern sound makes for a perfect choice for Jenny’s unconventional encore.

An encore as elaborate as Jenny’s requires some preparation. Not many performers can pull off a costume change and a choreographed performance at the last minute. At the beginning of their concerts, many musicians already have an encore selection in the back of their mind. However, some such as violin and piano duo Caroline Goulding and David Fung, make their decisions as soon as they step onto the stage for their third bow.

GOULDING: We’re going to play one more, uh, but it’s a sort of an impromptu. We just sort of noodled around with it for 5 minutes before… uh, before… about a possibility of an encore. So, it’s from the E minor Sonata by Mozart, and, uh, I’m gonna look off of his music. But uh, it’s a beautiful second movement, Tempo di Menuetto.

HARUTA: While the Mozart’s Sonata in E minor is a beautiful piece, it’s not necessarily the notes that make the performance spectacular. In this case, it’s the vibe the duo gives off as they play. Caroline stands behind David and reads over his shoulder. It’s clear they haven’t practiced this, but not because they’re playing wrong notes. In fact, if we weren’t watching them, we’d have no idea they were sight-reading. Rather, the way they squint at the music to read what’s written, and the way they’re acutely aware of each other’s interwoven musical lines, are the subtle clues that reveal to us that they’re playing this piece together for the first time. It’s exciting for the audience to hear something unplanned. It sparks an eager anticipation, knowing that the musicians and the audience both are embarking on a spontaneous musical journey.

And speaking of spontaneity, some artists decide to forgo a pre-composed encore altogether, choosing instead to improvise on the spot. Here’s an improvisation by Jeffrey Kahane, on an American theme that you’ll probably recognize.

HARUTA: Improvisations are magical. They emerge in the moment, and of the moment. Embedded in Jeffrey’s improvisation are elements of Tippet Rise. The majestic purple mountains and the waves of amber grain visible through the large window of the Olivier Music Barn were certainly a source of inspiration for Jeffrey’s performance.

Whether soothing or fiery, planned or improvised, old favorites or new surprises, each of the encores were gems this summer concert season at Tippet Rise.

Featured music (in order of appearance):