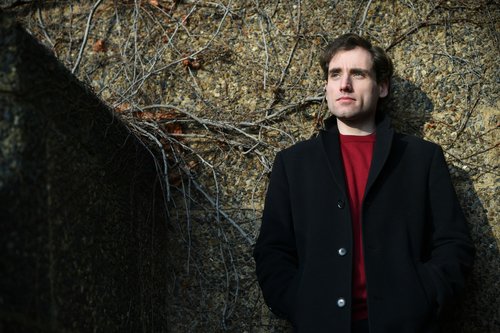 In the spring of 2020, we reached out to each of the musicians who would have performed at Tippet Rise this summer, our fifth season of classical music and sculpture tours, with a request: to record virtual postcards—videos, in other words—that we would share with our audiences via our Facebook, Instagram, and Twitter pages. We were absolutely delighted by the response. Beautiful and heartwarming greetings and impromptu performances arrived from all over the world.

Moscow-born Israeli pianist Boris Giltburg was scheduled to perform at Tippet Rise on Juy 17th, 2020. While we wish we could have watched him play in the Olivier Music Barn, we are thrilled to share with you the two films he sent to us: performances of Rachmaninoff’s Prelude in D major, Op. 23 No. 4 and his Prelude in C minor, Op. 23, No.7.

Below, Tippet Rise Co-founder Peter Halstead reflects on the D major Prelude. He also writes about the Opus 39 Etudes which Mr. Giltburg filmed over the course of one night in 2018, finishing up just after 5AM.

Each day, we post a postcard from The Season That Wasn’t and we will continue to do so until 2021. To watch them, please visit our Facebook, Instagram or Twitter pages every day until the New Year.

This is the closest any composer ever came to writing Chopin.

But the dreamy descant which descends after a while from the heights is the softest of Russian lullabies. In fact, it is just a descending scale, with a few notes added at the end to caress the air around the melody itself. A D Major arpeggio and a D Major scale are really the same notes; the scale just fills in between the arpeggio’s gaps, while the arpeggio just subtracts a few notes from the scale. So you could say that the piece is simply two versions of D Major, inverted.

The accompaniment is pure Chopin, similar to his bass for the D Flat Nocturne. But when it is turned upside down, it becomes Russian. How so much passion could exist so quietly in a mere scale is the genius of the piece. The scale takes on the timeless countryside, the still life, of the accompaniment.

The two hands travel upwards towards the sole crescendo (Rachmaninoff believed a piece should have only one), a scale up and a scale down, mirroring the inverted structure of the piece itself, and then end simply.

The trick is to start very slowly, so that the melody has enough room to accommodate the descant which develops over it like a sunset.

The luminous film of Turgenev’s novella, First Love, by Maximilian Schell, who wrote, directed, and starred in it, is epitomized by its score, which is the Largo of Chopin’s Piano Sonata No. 3, bringing out the unbearable pathos in the silent, desolate steppes which radiate Turgenev, Tolstoy, Glinka, Nabokov’s Speak Memory, and Rachmaninoff. This is the bleak tabula rasa on which every great Russian artist writes.

While every Russian aristocrat spoke French and ate French food, while Peter the Great rebuilt St. Petersburg as Versailles, designed by the French architect Le Blond, and while it is natural that this most ineffable of French melodies should grace Schell’s iconic masterpiece, it would have worked even better with the D Major Prelude, Opus 23, No. 4, with its childlike melody, a turn composed essentially of two notes: the first, the second, and the first again.

For Rachmaninoff, this is a simple, small-scale piece. But it has in it all the largesse of Russia. A sky may have nothing in it but air: but that same sky may be the soul of the world.

In 1903, Rachmaninoff had just married his cousin Natalia, taken a three-month honeymoon, been given a house by his wife’s parents at what would later be his beloved estate, Ivanovka, and seen the birth of his first daughter, Irina. He was fresh from his triumph with the 2nd Piano Concerto, and at the height of his powers. As Maxim Gorky said of Opus 23, “How well he hears the silence.”

Sergei Rachmaninoff was a piano prodigy. He developed into the greatest pianist of his age, mixing huge hands which could play the enormous extensions of the fingers required for his far-reaching chords, entire galaxies of voices in one swoop, with the most phenomenal gift of any era.

To invent a new pattern of notes is one thing, but to instill that pattern into the global consciousness so that it becomes timeless is a gift that has been given to only a few people over the ages.

Beyond his enduring and overarching themes for his piano concerti were his more focused and intense preludes and etudes. Like Chopin, who was his role model, these pieces were unique, inimitable, rich with the barnacles, seaweed, and shifting sands of an entire ecosystem. Chopin had no school that followed and imitated him, except for Rachmaninoff and Scriabin, whose own genius drew them instantly away from the Chopin that inspired them, so that the dependency is rarely noticed.

Chopin, for example, in his D Flat Nocturne constructed a piece that is as monumental as his Barcarolle. It’s a Rorshak blot, whose bass is the inverted image of its treble. Rather than being formulaic or mathematical, as Schönberg’s twelve-tone system tended to promote, where the notes fulfilled the pattern without having any particular harmonic identity, - that is, without being melodies, - Chopin can turn the brilliant metadata of his own template into gorgeous lyric euphonies which give no hint of their underlying mimetic scaffolding. This is also true of Rachmaninoff and Scriabin, whose ability to forge indigenous themes leapt ahead of their equally spectacular structures.

Rachmaninoff in his D Major Prelude used the same Rorshak structure as Chopin’s D Flat Nocturne. And yet as Chopin-like as it is, it is completely Russian.

Rachmaninoff’s preludes and etudes, like those of Chopin, Scriabin, and Ligeti, are meant to stretch the possibilities of technique and of musical structure. They are the apogee of their age, each in its own time a work of towering achievement for which there is no modern equivalent.

The preludes have become part of the universal repertoire since they were written, but the more complex etudes are less well known, except for the E Flat Minor etude which Horowitz often played as an encore, with its simple but apocalyptic melody.

Boris Giltburg has made both a beautiful recording and a revealing video of Opus 39 of the 9 Etudes, and has offered it to the world on YouTube without demanding anything in return. (Of course he also has on Naxos magnificent recordings of all Rachmaninoff’s Etudes, Preludes, and Concerti.) Not only is this monumental gift astonishingly generous at a time when musicians have zero income during the pandemic, but it is also the rarest of opportunities to be able to lavish on Rachmaninoff’s least-appreciated masterwork the close study it deserves.

Here is the extraordinary story of the all-night session in which Boris filmed the Etudes.

We are lucky to know so many musicians, poets, playwrights, composers, operas, and theaters who have given their services so freely this pandemic year at a time when they can least afford it. What a wonderful profession, which has brought so many people beauty and sanity through words and notes alone!