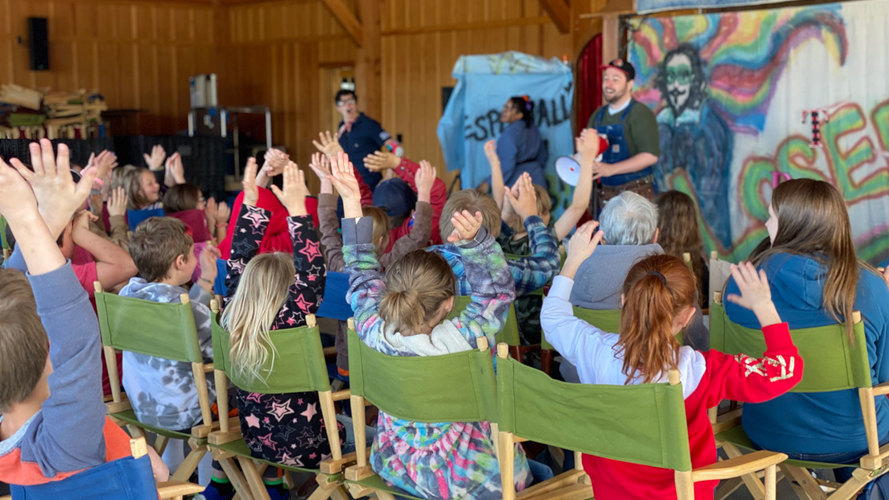 The students’ day at Tippet Rise began with a 40-minute performance of Bottom’s Dream, a creative adaptation of A Midsummer Night’s Dream written and directed by Matt Foss and performed by four talented actors. Montana Shakes! strives to make Shakespeare’s plays inspiring and relatable for even the youngest audiences, allowing them to think about their own lives in new and meaningful ways.

The students watched the performance with excitement and giggled as the characters worked through their “big feelings” of being scared, nervous, sad, and regretful to find that sometimes simply acknowledging these emotions is enough to break through them. After the performance, students participated in a question-and-answer session with the actors, during which one student commented, “Playing pretend makes me feel awesome!”, and another shouted out “When I grow up, I want to be very smart and an artist!”

The students were later divided into small groups for four 35-minute interactive workshops including combat and physical sessions that teach stage movements and clowning techniques; language, where students learned about new words; and a craft workshop, where students created paper character puppets, decorating lunch bags with different characteristics to create their own unique persona.

We are especially proud to be able to partner with Montana Shakes! as Montana Shakespeare in the Parks embarks on their 50th season, an extraordinary achievement for one of our region’s most beloved and impactful arts organizations. In celebration of this momentous anniversary, King Lear and Twelfth Night will be performed throughout the state and region this summer, June 15 – September 7, featuring over 75 performances. For the most up to date tour schedule visit ShakespeareInTheParks.org.