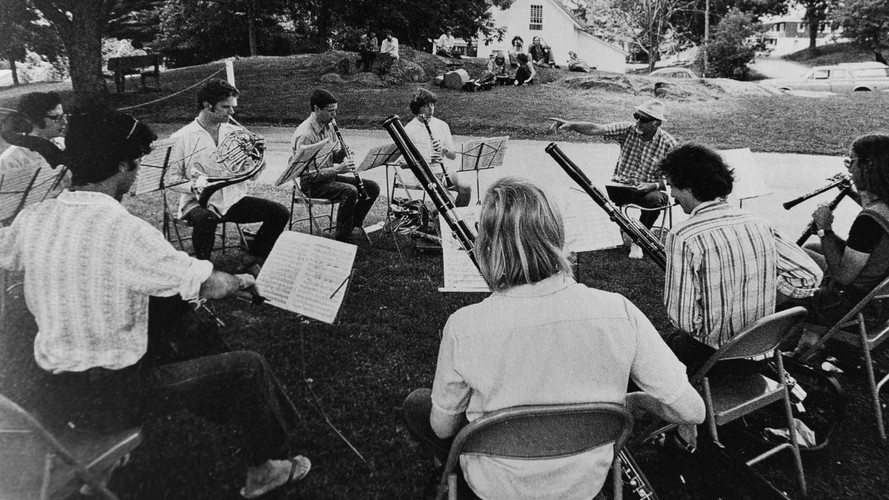 Marlboro and the vibrancy of music outdoors

One of our great inspirations has been the summer idyll held like a house party at Marlboro College for 65 musicians since 1951; it continues today. As we strengthen our commitment over the next few years to the great luxury of hearing music outdoors, we’d like to say that it all started with Marlboro.

Led by Rudolf Serkin, recorded by the wonderful in-house engineers at Columbia Records, it shaped our concept of what music was, whether it was the slow, Viennese tempi from before the Second World War played by the Busch family, or, later Pablo Casals’ vibrant new Bach interpretations, or Peter Serkin’s introspective Tashi (“Good Fortune”) Quartet, named after his dog, which he got from a Tibetan weaver in Kathmandu. Other great Quartets came out of Marlboro: the Beaux Arts, the Juilliard, the St. Lawrence, the Emerson, the Orion. In years afterwards, Richard Goode (who is coming this summer to Tippet Rise) was the co-director with Mitsuko Uchida. You can hear the innovative poetry + music concert which he did for a special Tippet Rise video concert a few months ago here.

The Marlboro musicians came out of the European diaspora driven to the States by the War. This tragedy of history had the silver lining of bringing great music to the States, and in the summer from the Curtis School to Marlboro, where the hierarchy of teachers and students was temporarily suspended, and where Austrian and German performance traditions were preserved, which lent certain pieces a relaxed pace in which their colors could flourish. In later generations, speed became the calling card of talent, to the detriment of the emotion behind the music.

But the real appeal of Marlboro was the same as early Aspen, as all outdoor happenings are before they are polished and moved indoors. Like food, certain things just feel better outdoors. When the musicians outnumber the audience, mathematicians might say the event was a failure. But anyone who was there would tell you that it was the best concert they ever heard.

You can hear music from Marlboro’s perfect past on the below link. Listen to how slow the Schubert Notturno is, and how right it sounds.

Photo by Woodrow Leung. The Marlboro Festival in 1973.