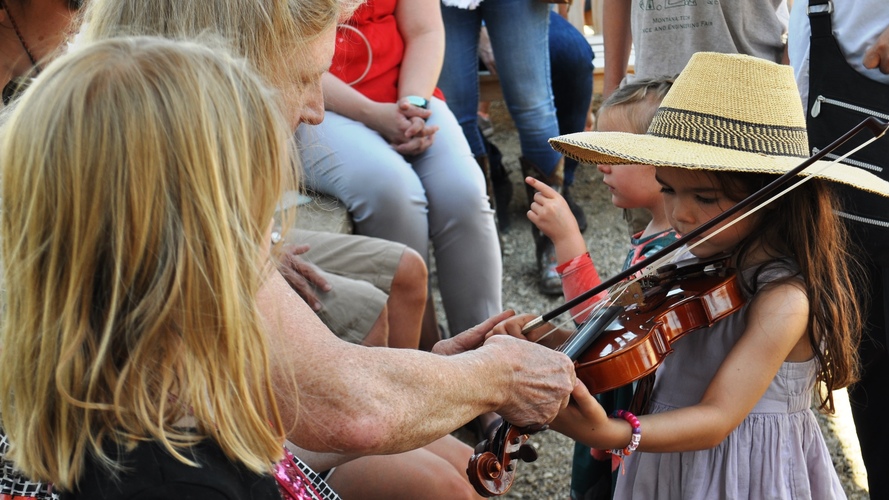 “I want to learn the violin!"

On a perfect summer day in mid-July, internationally-renowned pianist Pedja Mužijevic and members of the acclaimed St. Luke’s Chamber Ensemble performed works by Scarlatti, Bach and Brahms. The sold-out concert included bows, moments of beauty and grace, an encore, the usual stuff. It also included an instrument petting zoo, a question and answer session. Not so usual, one might say, and it wasn’t! Rather, this event was designed for kids and was the first of two such concerts this season at Tippet Rise.

Strains of Twinkle, Twinkle Little Star floated from the piano past dozens of families making their way down a path to the outdoor venue, the Tiara acoustic shell. Children giggled, adults grinned, and a few babies squawked, then settled under the acoustic shells or lounged on grassy slopes surrounding the venue.

For Mužijevic and members of the St. Luke’s Chamber Ensemble, the event was the culmination of a weekend filled with performances at Tippet Rise. Ensemble members include Krista Bennion Feeny, violin; Myron Lutzke, cello; and Stewart Rose, French horn. All four musicians helped to lead the instrument petting zoo and performed short, kid-friendly compositions. Each musician opened with a brief explanation of their instrument and how it produces sound. Pianist Pedja Muzijevic plucked the strings of the grand piano on stage like a harp to demonstrate the variety of ways one can create music on a piano. The audience clapped along with Krista Bennion Feeny’s rousing “Irish Washer Woman” jig. Following the concert, Bennion Feeny told the audience that performing at Tippet Rise is inspirational. “Making music in this beautiful setting,” she said, “and surrounding myself with nature makes me a better musician.”

The second concert, held in the Olivier Music Barn, was similarly festive and interactive. This time, members of the Escher Quartet as well as the clarinetist Anton Dressler and the celebrated Argentinian pianist Ingrid Fliter headlined the event, playing tunes by Gershwin, Beethoven and Paganini, and holding lively conversations, and another instrument petting zoo, with the hall full of curious children.

During the first concert, Renee Huether, a 36-year veteran music teacher in Absarokee, Montana placed a tiny violin in an eager three-year-old’s arms and helped her draw the bow over the strings while repeating “Mississippi Stop Stop” – the Suzuki bowing technique for beginners. After producing one thin and silvery sound from the bow skimming the strings, the child grinned and said, “I want to learn the violin!”

At Tippet Rise, every performance brings us great joy. It’s perhaps these—where all barriers between performers and audience members completely dissolve, where children laugh and play with world-class musicians, where we hope they fall in love with classical music—that make us grateful.