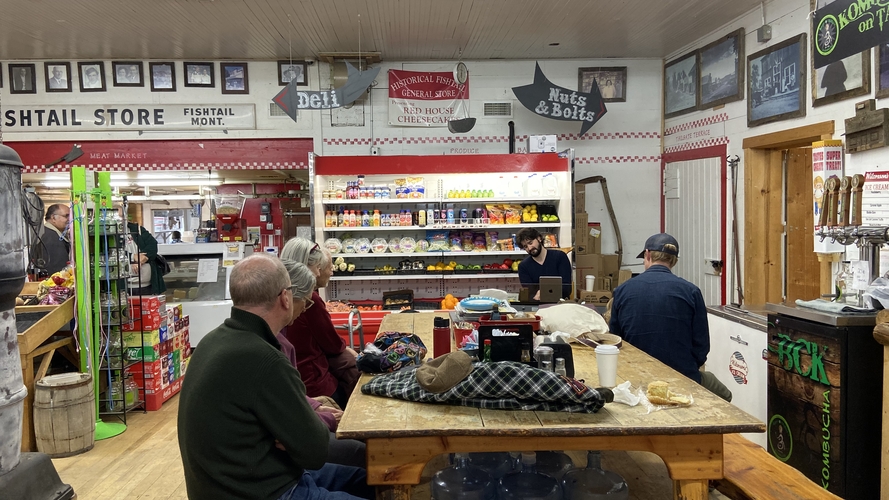 If you know the tiny town of Fishtail (population 474, according to the 2010 census), you know that its general store is not just a place to pick up a half gallon of milk or a copy of the weekly newspaper, it’s a community hub. Founded in 1900, the Fishtail General Store serves as a gathering place for many of in this part of Stillwater County, be they residents of the town proper, employees of the mine up the road, or ranchers whose sheep and cattle roam and graze the region’s undulating hills. The store is a place to fill your truck’s gas tank on a cold winter morning and then stop in and not only warm up, but catch up—over a steaming cup of coffee or, in the afternoon, a bit of homemade Mexican food from the deli in the back. Almost always, the store’s owner, Katy Martin, is on hand, with her warm, welcoming smile, working the cash register, restocking the shelves, tidying up. All the while, taking care of her many customers, her many friends.

On Sunday, the celebrated French pianist and composer, Julien Brocal, currently in residence at Tippet Rise, stopped by the general store. A frequent visitor to the art center, either to perform, compose, or record, Julien, like many of our artists, is drawn to the place. For practical purposes, yes (Katy carries all of the necessary sundries, and then some), but also to say hello to Katy and her staff.

This past weekend, Julien and a couple of staff members from Tippet Rise had another idea in mind. On Saturday, they had proposed an idea to Katy: that Julien perform an impromptu, “pop-up” concert at the store the next day. Katy said yes and, on Sunday, on an electric keyboard set up by a picnic table by the deli, Julien performed. His audience was a gathering of pleasantly surprised locals, there that day to catch up and commune, as they usually do on a Sunday afternoon. Julien’s “program” for the event included works by Claude Debussy, Frédéric Chopin, and Maurice Ravel, as well as his own composition entitled, Souvenirs. After his performance, Julien talked and laughed with Katy and her customers.

Born in Arles, France, Julien began learning the piano at the age of five. His first solo recording, of works by Chopin, received critical acclaim from the international press and garnered him BBC Music Magazine’s Newcomer Award for 2018. His second solo recording, Reflections, featuring works by Frederic Mompou and Ravel, was recorded here at Tippet Rise. Julien’s performances at the art center, in 2018 and 2019, have made him a beloved performer to our audiences and a friend to many here.

During his stay this month at Tippet Rise, Julien will also perform several concerts in the region’s schools in Fishtail, Absarokee, and Luther.

Thank you, Katy and Julien, for a wonderful musical occasion!