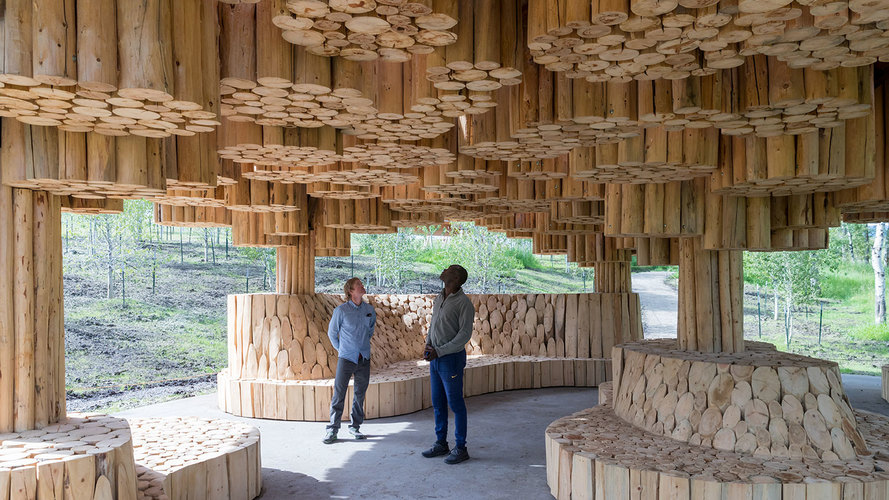 We are immensely happy for our friend Francis Kéré who has been named the 2022 Laureate of the Pritzker Architecture Prize. Born in the village of Gando in Burkina Faso, he is the first African and the first Black architect to win the prize, which has been awarded annually since 1979. Francis Kéré was recognized for his years-long commitment to creating community-centered and environmentally sustainable designs, including many projects that improve the daily lives of people in his home of West Africa such as primary and secondary schools, health care centers, and libraries.

Tippet Rise co-founders Peter and Cathy Halstead said, “We are overjoyed that Francis has been recognized with the Pritzker Prize. Francis creates structures for his own country, the poorest country in Africa. The people of Burkina Faso are lucky in their native son, Francis, the first person to leave his village, who came back with so many gifts for the children of his native land.

“It is a great honor to be able to share in the creation in Gando of the Naaba Belem Goumma secondary school, named for Francis’s father, who believed in the value of educating his son. His son has in turn educated the world in charity, compassion, and humility.“

“Our own community is fortunate to have Francis’s Xylem as a gathering place, where we can celebrate the links between our communities, although they are at opposite ends of the earth. Education has no geography.”

Xylem, which opened in 2019, was named to evoke the vital internal layers of a tree’s living structure and is a place where visitors to Tippet Rise gather to converse, contemplate the views of the aspen and cottonwood trees near the bank of Grove Creek, or sit and meditate in solitude. Like many of the architect’s projects, Xylem is informed by the traditional architecture of Kéré’s homeland, specifically, in this case, the traditional togunas of the Dogon culture of Mali: sacred shelters with wooden pillars and layered roofs of wood and millet straw, which provide protection from the sun as well as ventilation within the space beneath. Xylem is constructed of locally and sustainably-sourced ponderosa and lodgepole pine, and features a canopy of vertical logs above the seating areas, to create both shelter and a play of light and shadow, placing visitors in the center of the tree, so they become the xylem, conduits between earth (roots) and sky (leaves), as we all are.

Francis Kéré’s work spans the globe, with commissions that have included the Serpentine Pavilion in London, a pavilion for the Coachella Valley Music and Arts Festival, and showcases at the Venice Biennale of Architecture, among many others. The Tippet Rise Fund of the Sidney E. Frank Foundation also proudly supported Kéré in his work to build the Naaba Belem Goumma Secondary School in his birthplace of Gando.

The Pritzker Architecture Prize honors a living architect or architects whose built work demonstrates significant contributions to humanity and the built environment through the art of architecture. The international prize was established by the Pritzker family of Chicago through their Hyatt Foundation. It is granted annually and is often referred to as “architecture’s Nobel” and “the profession’s highest honor.”
Previous winners of the Pritzker Prize have included I.M. Pei (1983), Frank Gehry (1989), Renzo Piano (1998), and Zaha Hadid (2004).

Of Francis’s achievement, the Pritzker Prize jury said, “His buildings, for and with communities, are directly of those communities — in their making, their materials, their programs and their unique characters. They are tied to the ground on which they sit and to the people who sit within them. They have presence without pretense and an impact shaped by grace.”

We are honored to have Francis Kéré’s inspirational pavilion at Tippet Rise and look forward to welcoming visitors to experience it when we reopen on June 10 for the summer season.

Click ‘More Info’ below to read more about Francis’s amazing achievement, from articles published by news outlets around the world.