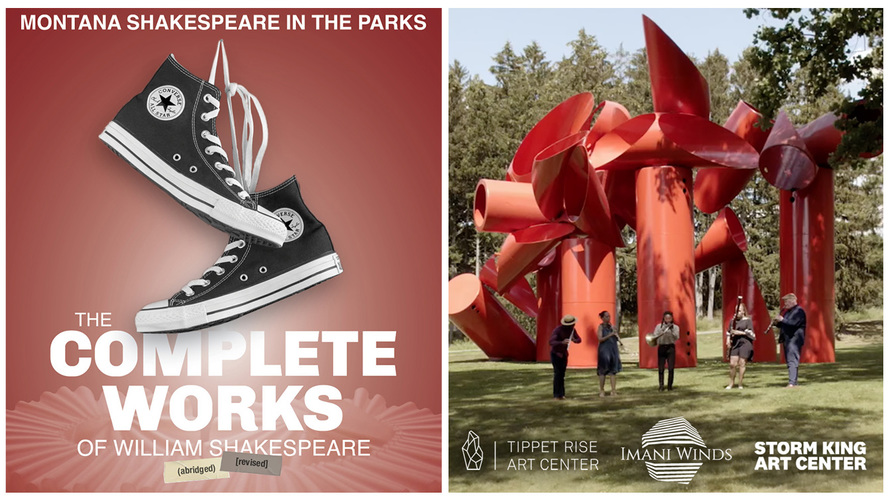 We are excited to partner with some fantastic arts organizations and artists this fall for two upcoming public programs.

On Thursday, November 17 at 5:30 PM Mountain Time, all are welcome to join us on Zoom for an online conversation with our co-founders Cathy and Peter Halstead and Artistic Advisor Pedja Mužijević, in addition to some very special friends including Storm King Art Center’s David Collens, Director Emeritus, and Victoria Lichtendorf, Director of Education and Public Programs; and flutist Brandon Patrick George and bassoonist Monica Ellis of the Imani Winds.

The conversation will be an opportunity to celebrate the release of three new films that captured the Imani Winds performing in New York’s beautiful Hudson Valley at Storm King Art Center as part of our ongoing Tippet Rise on Tour series. Set against the backdrop of Alexander Liberman’s dramatic and architectural sculpture Iliad, the films, directed by Zac James Nicholson, demonstrate how sculpture can be enlivened by music, and the many synergies between art, music, architecture, and nature. During the Zoom event, we also look forward to sharing more about Storm King, which the Halsteads have often cited as an important inspiration in creating Tippet Rise, as well as the chance to hear directly from members of the Imani Winds about the music they performed, including works by Mongo Santamaria, Nathalie Joachim, and Jason Moran.

A link to the performance films will be made available at the conclusion of this brief discussion. The films will also be available on the Tippet Rise website and on our YouTube channel.

Click here to register for this online event. After registering, you will receive a confirmation email containing information about joining the Zoom meeting.

We have been fortunate to collaborate over the years with Montana Shakespeare in the Parks and look forward to welcoming them to Tippet Rise on Saturday, November 19 for a live performance of The Complete Works of William Shakespeare (Abridged) (Revised).

This free performance will begin at 5:30 pm. Reservations are required and can be made here.

This production is also uniquely special as it is part of Montana’s Shakespeare in the Parks celebratory 50th season, an extraordinary achievement for one of our region’s most beloved and impactful arts organizations.

We hope you can join us next month, either virtually or in-person!