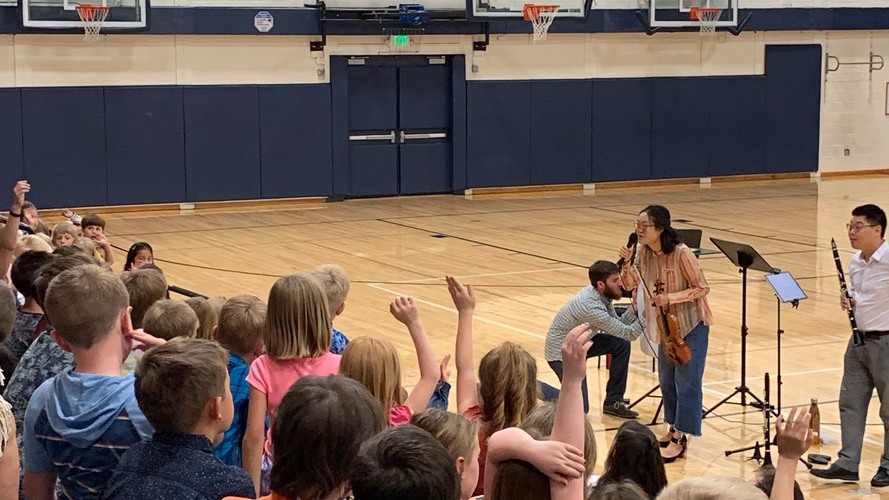 An excited audience gathered in the Absarokee Elementary School gymnasium on Thursday, September 5, but it wasn’t for a basketball game. Instead, about 80 students, grades K-5, from Absarokee, Fishtail and Nye settled in for a concert. The players were three of the country’s finest young classical musicians: Suli Tekalli, violin, Meagan Turner, viola, and Arlen Hlusko, cello. All members of Ensemble Connect, a program of New York’s Carnegie Hall, the Weill Music Institute, and the Julliard School, the musicians weren’t in Absarokee just to entertain, but also to interact, inspire, and instruct.

In the hour that followed, the sounds of Mozart, Bach, and the Hungarian composer, Ernő von Dohnányi soared through the gym. Midway through an Aria by Mozart, the ensemble paused. “What does the music sound like?” one of the musicians asked. A dozen hands shot up. “It’s graceful…like grass,” said a little boy, “like grass blowing in the wind!”

The players then asked the children to request the Aria in various “textures.” One shouted, “Make it squeak!” Another said, “Make it sound like sandpaper!” And another asked the group to make the music sound “rubbery.” By varying their bowing techniques, the musicians complied, creating no shortage of laughter and fun as they led their audience on an exploration of the wide range of sounds that can be created with just a few stringed instruments.

After the concert for grades K-5, the musicians presented a second concert for an audience of approximately 85 middle and high school students. Meanwhile, in Red Lodge, a similar program for children was taking place, led by three other members of Ensemble Connect: Jennifer Liu, violin, Leo Sussman, flute, and Paul Cho, clarinet. By the end of the day, the six musicians had performed for and interacted with almost 500 students from Absarokee, Fishtail, Nye and Red Lodge.

Ensemble Connect’s visits to Absarokee and Red Lodge were presented by Tippet Rise, where the musicians performed the weekend after the school concerts. Although most in the audiences at the art center were decades older than those in the school gymnasiums, the enthusiasm and excitement were just as evident.