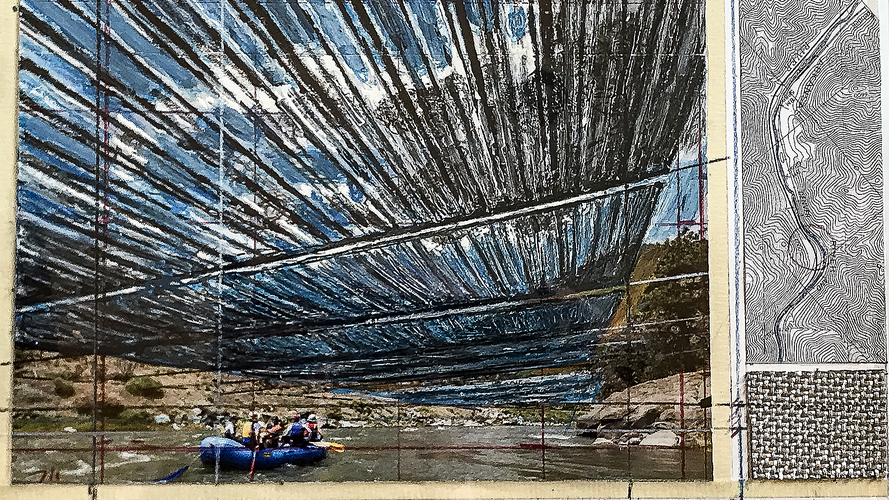 The artist Christo died at his home in New York City on May 31st. He was 84.

Christo and his wife, Jeanne-Claude, got honorary degrees along with Cathy’s father at Brown during the Commencement of 2005.

Christo and Jeanne-Claude did everything together. Jeanne-Claude relished the fights they went through in order to wrap monuments. The triumph over bureaucracy was part of the process, as were the sketches Christo did of the work in progress.

We acquired the diptych which is today at the Tippet Rise guest house, Tia, from Christo at his studio in New York. The two sketches are of their project, Over the River, where they planned to stretch mylar panels over the Arkansas River for almost seven miles. Jeanne-Claude died in 2009, and, without her, Christo lost heart for the fight. They achieved almost all of their goals, most famously wrapping the Pont Neuf in Paris, which inspired Over the River. Along the way, they wrapped the Reichstag and the Arc de Triomphe.

It wasn’t the actual wrapping, it was the way both architecture and nature drew new perspectives from it.

The way they brought art outside, the way they turned architecture into land art, the way they thought outside the box, enlarged the concept for us of what art could be, and what we could try to do at Tippet Rise. Christo’s vision opened a window for us. When we began talking with Ensamble Studio about prehistory and the music of the spheres, we had Christo in mind. He showed us it was viable.

We had discussed with Christo the idea of his coming to Montana to speak at Tippet Rise and at the universities in Montana. We had a wild dinner with him in Denver, and looked forward to a long friendship. As it turned out, we were lucky to have briefly known two people who had such an influence on the changing boundaries of art in our time.

Click “More info” below to view the site which describes the ambitious project that never came to be with examples of many of Christo’s sketches for it. Because of these works of art and sites like this, the project lives on in our imaginations as long as it would have, had it happened.