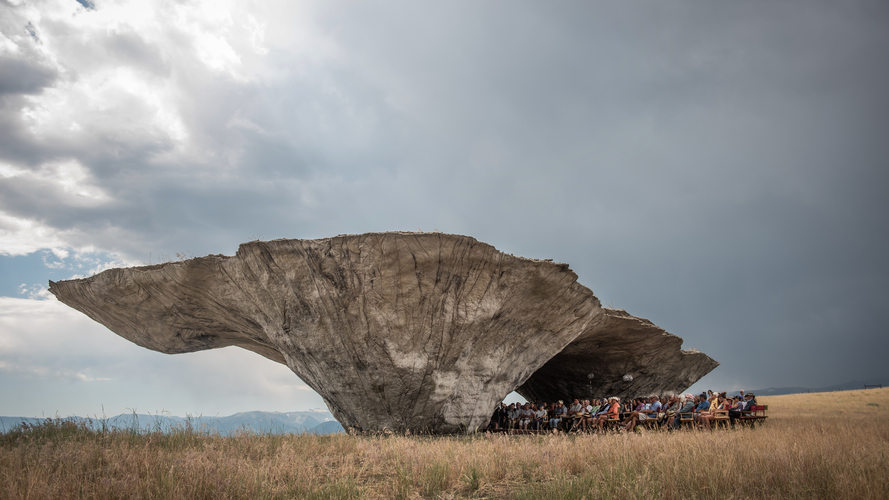 We are so pleased to announce the 2019 summer concert season at Tippet Rise. Under the direction of newly appointed Artistic Advisor Pedja Muzijevic, Season Four features seven weeks of classical chamber music and recitals by internationally celebrated performers and outstanding emerging artists from around the world. The concert season begins July 12 and ends September 7. The full schedule is available on the Events page on our website.

Season Four Highlights
The Gryphon Trio will begin the season on Friday, July 12 with a program contrasting early chamber music by Beethoven and Brahms with a work by the globe-trotting, Sri Lankan-born composer Dinuk Wijeratne. The next day, members of the Gryphon Trio will be joined by flutist Brandon Patrick George for a concert with works by Haydn, Debussy, Ravel, and Steve Reich. Internationally acclaimed pianist Stephen Hough will return to Tippet Rise to perform, on July 13, a virtuosic program of works by Bach, Chopin, Busoni, and Liszt, as well as his own Sonata No. 4 (Vida Breve).

Also returning to Tippet Rise is the St. Lawrence String Quartet, whose program on July 19 will combine quartets by Haydn with contemporary works by Jonathan Berger and Osvaldo Golijov. The following day, members of the quartet will perform works by Bach, Beethoven, and Prokofiev, including a Golijov arrangement of Beethoven bagatelles. Pianist and composer Julien Brocal, who received the 2018 Newcomer of the Year Award from BBC Music Magazine, will return to Tippet Rise on July 20 to perform the world premiere of three of his own compositions – Reflections, Into the Wild, and Snowing on the Moon—as well as two of Chopin’s Ballades and works by Bach and the distinguished nature-inspired Latvian composer Pēteris Vasks.

Pianist Aristo Sham made a stir internationally in 2017 by winning prizes at the Verbier Festival and the Clara Haskil, Saint-Priest, and Viotti international piano competitions. On August 2, he will play a Romantic recital with works by Schumann and Brahms, followed the next day by a performance with cellist Gabriel Cabezas and violinist Katie Hyun in works by Haydn and Mendelssohn.

Continuing Tippet Rise’s commitment to commissioning new works, 2019’s concert season features the world premiere of John Luther Adams’s Lines Made By Walking (String Quartet No. 5), to be performed on August 3 by the JACK Quartet. John Luther Adams was in residence at Tippet Rise in summer 2018 and began composing this new work then.

Week four of the season will be a mini-residency for pianist Roman Rabinovich, violinist Paul Huang, and the Escher String Quartet. Their wide-ranging programs will span repertoire from Bach, Schubert, Brahms, Dvořák, and Saint-Saëns to György Ligeti’s trailblazing 1951-53 Musica ricercata. Celebrated pianist Behzod Abduraimov will make his Tippet Rise debut on August 16 in a concert of music by Liszt and Mussorgsky. On August 17, the Rolston String Quartet will perform works by Haydn and Debussy in the morning, followed by an evening performance by pianist Jenny Chen. A rising star who has performed annually at Tippet Rise since the 2016 inaugural season, Jenny will appear at the art center this year after making her Carnegie Hall debut, playing an ambitious selection of pieces by Chopin and Beethoven.

Tippet Rise will close the concert season by welcoming members of Ensemble Connect, a two-year fellowship program of Carnegie Hall, The Juilliard School, and the Weill Music Institute in partnership with the New York City Department of Education. Piano duo Anderson & Roe will perform the last concert of the season with a program of Mozart, Stravinsky, Piazzolla, and Paul Schoenfield, along with the duo’s arrangements of the ballet music from Gluck’s Orfeo ed Euridice and Leonard Bernstein’s West Side Story Suite and their own Hallelujah Variations (Variations on a Theme by Leonard Cohen).

Ticketing Information
Tickets for the season’s performances will be available through a randomized drawing, for which registration via the Tippet Rise website is required. The registration period opens at 10 AM Mountain Time on Wednesday, February 20th and closes on Monday, March 11 at 5:00 PM Mountain Time. Winners will be selected at random on Tuesday, March 12, and notified by email. Winners may purchase up to four tickets to one performance or divide their tickets among multiple performances. For additional details and to enter the drawing for Season Four, please visit the drawing page here. Registration for the drawing is limited to one entry per person.

For a sneak peek at Season Four, click on the link below. We hope to see you this summer at Tippet Rise!