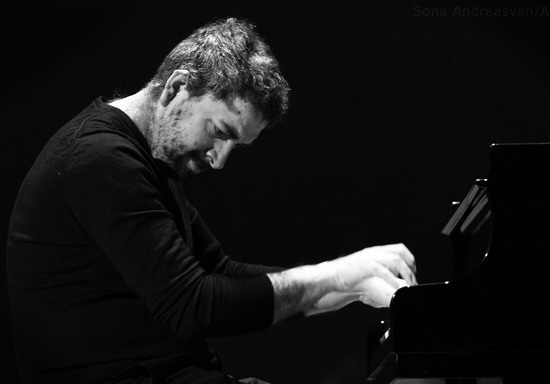 **Konstantin Lifschitz** The New York Times music critic Edward Rothstein named his 1996 recording of Bach’s Goldberg Variations “the most powerful interpretation since that of Glenn Gould.” Konstantin Lifschitz was born in Kharkov into a musical family, and at the age of five entered the Moscow Gnesins’ Specialised Middle School of Music, in the class of Tatiana Zelikman. He subsequently studied in Russia, the UK and Italy under Vladimir Tropp, Theodor Gutman, Hamish Milne, Alfred Brendel, Fou Ts’ong, Karl Ulrich Schnabel, Leon Fleisher, Rosalyn Tureck and Charles Rosen. In the early 1990s, Mr. Lifschitz received a grant from the Russian Cultural Foundation. He has subsequently performed in Paris, Munich and Milan. While taking part in the New Names programme, he drew the attention of Vladimir Spivakov, who invited him to perform on tour in Japan with the Moscow Virtuosi ensemble in a programme featuring Bach’s Concerto in D Minor. Konstantin Lifschitz has since appeared with Vladimir Spivakov at Monte Carlo and in Antibes, performing Chopin’s Piano Concerto No 1. At the age of thirteen, Mr. Lifschitz gave a recital at the October Hall of the House of Unions in Moscow, marking a new stage in his solo career. Around 1994, Denon Nippon Columbia began to release recordings by the pianist. In 1995, Konstantin Lifschitz received the German Echo prize for his debut recording in the category “Most Promising Artist of the Year.” Mr. Lifschitz has worked with the conductors Yuri Temirkanov, Bernard Haitink, Dietrich Fischer-Dieskau, Yuri Simonov, Eri Klas and Mstislav Rostropovich. He frequently gives chamber music concerts, partnered by such master musicians as Gidon Kremer, Dmitry Sitkovetsky, Maxim Vengerov, Patricia Kopachinskaya, Yevgeny Ugorsky, Leila Josefovich, Lara St. John, Mischa Maisky, Sol Gabetta, Mstislav Rostropovich, Lynn Harrell, Jiří Barta, Bella Davidovich and Valery Afanasiev. In autumn of 2008, Mr. Lifschitz performed Shostakovich’s Second Piano Concerto with the Theater und Philharmonie Essen Orchestra under Konstantinos Karydis. He then completed a tour of Germany with the Musica Viva ensemble as both pianist and conductor. He conducted the ensemble in performances of works by Bach, Stravinsky, Mendelssohn and Tchaikovsky. Conducting is Mr. Lifschitz’s second major creative field; between 2006 and 2008 he studied at the conducting faculty of the University of the Arts in Berlin. This season the pianist toured Germany with the Bern Symphony Orchestra under Andrei Boreiko, in addition to concerts in Munich and Moscow and his first visit to South Africa at the Capetown Arts Festival. The pianist has an extensive discography. In 2007 he recorded Bach’s A Musical Tribute and Frescobaldi’s toccatas. In 2008, together with Austrian Radio and TV Orchestra, he recorded Gottfried von Einem’s Piano Concerto and, in 2010, Bach’s The Art of the Fugue. VAI has released a DVD of Bach’s Well-Tempered Clavier. Mr. Lifschitz has twice won the Rovenna prize for his outstanding contribution to the performing arts. He is an honorary member of the Royal Academy of Music in London and has been a professor of the Musikhochschule in Lucerne since 2008.