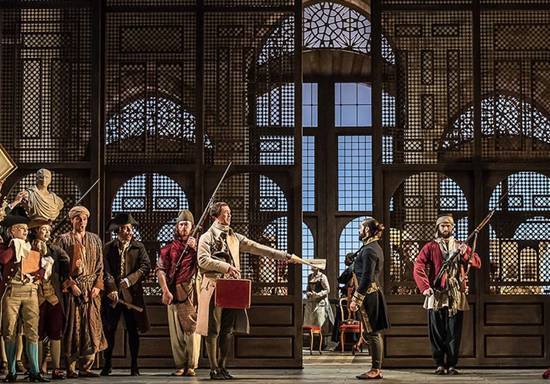 "Die Entfuhrung has knocked everything else sideways," wrote Goethe of this landmark work by the 26-year-old Mozart. A popular Singspiel in which tuneful Viennese comedy meets serious Enlightenment philosophy, the piece is often cited as his first fully mature stage work. Like many other contemporary works, Die Entführung was inspired by the 18th-century vogue for all things Eastern after the Ottoman Empire’s failed Siege of Vienna in 1683. The plot concerns the attempt of the Spanish nobleman Belmonte to rescue his beloved Konstanze from the seraglio of the Pasha Selim in Turkey. Though the opera reflects the 18th-century European view of "the Orient" as strange, opulent and dissolute, its humane and surprising resolution defies all stereotypes and highlights the keen contemporary pertinence of this startlingly deep masterwork. Die Entfuhrung features some of Mozart’s most spectacularly virtuosic vocal music, particularly for Konstanze, composed for the celebrated Austrian soprano Caterina Cavalieri: Mozart wrote, "I have sacrificed Konstanze’s aria a little to the flexible throat of Mlle Cavalieri." In Die Entfuhrung , Mozart also evoked the brilliant flute- and percussion-laden sound of Turkish military marching bands, as he had done in earlier works like the famous Rondo alla turca from his A-Major Piano Sonata, K. 331/300i. Music director Robin Ticciati conducts the Orchestra of the Age of Enlightenment, carrying on Glyndebourne’s distinguished history with Die Entfuhrung which began with its seminal 1935 production. This new production is directed by David McVicar, creator of such triumphant Glyndebourne productions as Giulio Cesare and Die Meistersinger von Nürnberg . The luminous soprano Sally Matthews will return to Glyndebourne as Konstanze, as will Edgaras Montvidas after his Festival 2014 triumph in Eugene Onegin, while the German bass Tobias Kehrer, Norwegian soprano Mari Eriksmoen and American tenor Brenden Gunnell make their Glyndebourne debuts as Osmin, Blonde and Pedrillo.