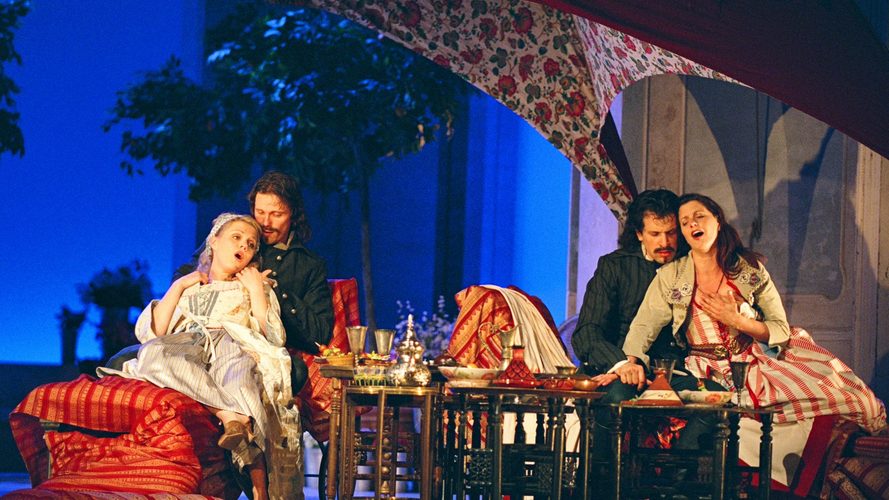 At Glyndebourne in East Sussex, England, the gardens are blossoming in heady profusion. With the summer opera season usually in full swing by now, you might not only notice the dizzying array of blossoms, herbs and perfectly manicured privet hedges, you might also see operagoers picnicking in their summer finest. However, like so many arts organizations, Glyndebourne has had to cancel its season this year. In its stead, the company is offering a virtual opera festival. Each Sunday at 5PM UK time, Glyndebourne screens a full-length opera from its archives of past productions. The opera remains available online for a full week for audiences around the world to enjoy, for free.

Glyndebourne’s website reads, “In true Festival style, we hope you’ll use this as an opportunity to make memories – dust off your finery, clink a glass with friends and family and be united with opera lovers from across the globe. We can’t conjure the smell of the Glyndebourne roses or a view of the lake, but we can still create an experience to share.”

With libretto by Lorenzo Da Ponte, Così Fan Tutte premiered at Vienna’s Burgtheater in January 1790. It is last of three collaborations between Mozart and Da Ponte (the others were The Marriage of Figaro (1786) and Don Giovanni (1787)).

About Glyndebourne, by Peter Halstead
Imagine the French countryside painted by Seurat, by Monet, by Corot, or the British countryside painted by Constable, Coleman, or Ruisdael: Lewis Carroll’s “All in the Golden Afternoon,” or Keats’s “To Autumn:” - “Season of mists and mellow fruitfulness,” - and then people the meadows with sheep and the adjoining lawns with diners in kilts and stoles, and you have the British summer, and, on top of it, the most extraordinary opera in the world.

The Christies eventually built a stunning opera house, designed by Arup (who also did the Olivier Barn at Tippet Rise), hired the greatest conductors, rising young singers, and, uniquely, stage directors from London’s National Theatre such as Nicholas Hytner, so that the comic routines are genuinely funny and the acting is the equal of London’s West End.

Despite being the seminal opera experience in Europe, Glyndebourne is still mostly unfamiliar to American audiences. We hope you will enjoy the trip to England from the comfort of your living room. After this difficult time is over, we hope you will experience for yourselves the warmth, charm, acoustics, champagne, and Mozart on one of those bucolic and unforgettable Sussex afternoons

We’ve shown Glyndebourne’s wonderful productions of Cenerentola and The Marriage of Figaro at Tippet Rise, and now Glyndebourne itself offers you their delightful productions online. Our thanks to Glyndebourne for making a night in the country available for free to all of their fans in these unprecedented times.

Così Fan Tutte has ended, but Glyndebourne’s online festival continues through midsummer. For information on each week’s offerings, please click on “More info” below.