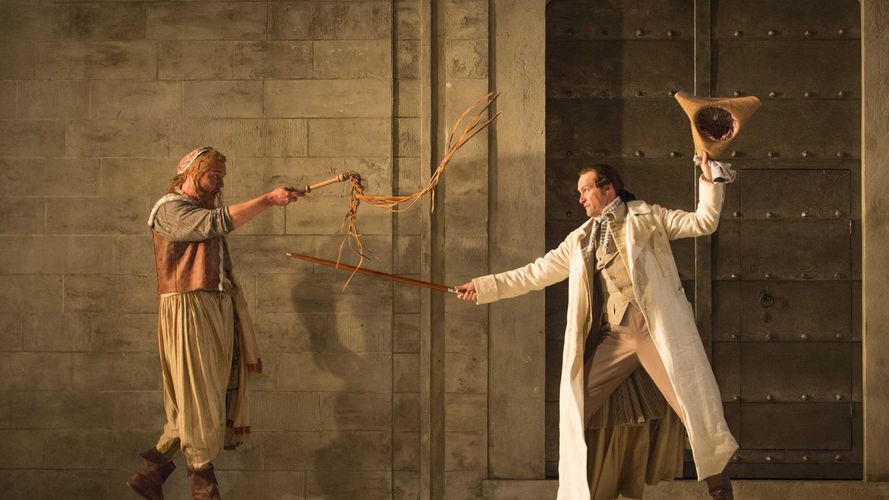 Mozart’s beautiful and comic Die Entführung aus dem Serail (Abduction from the Seraglio) premiered in July 1782 at the Burgtheater in Vienna, when the composer was 26 years old. Although the opera’s first performance was tainted by heckling from the musicians, Die Entführung became a box office hit anyway, enchanting the Viennese and then audiences in Prague, Paris, and throughout German-speaking Europe and establishing Mozart’s reputation as a serious composer in the process. Technically a German “singspiel,” or “sing-play,” Die Entführung not only elevated Mozart’s standing, it also raised the singspiel: with its multifaceted characters and its compositional depth, including challenging, spectacular arias, the sing-play became high art.

Today, you can watch Mozart’s beloved Die Entführung from the comfort of home, for free, thanks to a partnership between the UK’s renowned Glyndebourne Opera House and OperaVision, a project of Opera Europa and the European Union’s Creative Europe program. Staged by the acclaimed director, David McVicar, Glyndebourne’s production of Die Entführung is available to stream, for free, through May 20, 2020.

The opera’s plot centers on the nobleman Belmonte and his servant, Pedrillo, who endeavor to rescue their beloveds, Konstanze and her maid, Blonde, from the pasha Bassa Salim’s harem. “Unlike other productions,” said Tippet Rise cofounder Cathy Halstead, “Glyndebourne’s 2015 version is upside down, stressing the Stockholm Syndrome attraction between the pasha and the princess, but, of course the world comes right in the end.”

About Glyndebourne
-By Peter Halstead

Imagine the French countryside painted by Seurat, by Monet, by Corot, or the British countryside painted by Constable, Coleman, or Ruisdael: Lewis Carroll’s “All in the Golden Afternoon,” or Keats’s “To Autumn:” - “Season of mists and mellow fruitfulness,” - and then people the meadows with sheep and the adjoining lawns with diners in kilts and stoles, and you have the British summer, and, on top of it, the most extraordinary opera in the world.

The Christies eventually built a stunning opera house, designed by Arup (who also did the Olivier Music Barn at Tippet Rise), hired the greatest conductors, rising young singers, and, uniquely, stage directors from London’s National Theatre such as Nicholas Hytner, so that the comic routines are genuinely funny and the acting is the equal of London’s West End.

Despite being the seminal opera experience in Europe, Glyndebourne is still mostly unfamiliar to American audiences. We hope you will enjoy the trip to England from the comfort of your living room. After this difficult time is over, we hope you will experience for yourselves the warmth, charm, acoustics, champagne, and Mozart on one of those bucolic and unforgettable Sussex afternoons.

We’ve shown Glyndebourne’s wonderful productions of Cenerentola and The Marriage of Figaro at Tippet Rise, and now Glyndebourne itself offers you their delightful productions online. Our thanks to Glyndebourne for making a night in the country available for free to all of their fans in these unprecedented times.

Die Entführung aus dem Serail has ended, but Glyndebourne’s online festival continues through midsummer. For information on each week’s offerings, please click on “More info” below.